CHICAGO - Private booters roaming free in more than half of Chicago’s 50 wards could soon get the go-ahead to take their controversial, car-disabling operations citywide.

A divided City Council Committee on License and Consumer Protection on Thursday voted 12-6 to advance an ordinance championed by retiring Ald. Ariel Reboyras (30th) at the behest of former colleague Joe Moore, who had represented the 49th Ward.

Moore convinced Reboyras to introduce an ordinance allowing merchants across the city to contract with private companies to patrol private lots and prevent motorists from parking in spaces reserved for the merchants’ customers.

Currently, booting on private lots is allowed only if the local alderperson opts in, as roughly half of the 50-member City Council has done.

If approved by the full Council, the new ordinance would allow any business in any ward across the city to contract with private booters.

"This ordinance does not obligate any business or any strip mall to have this. They have an option. … This ordinance simply makes sure that any vehicle that’s parked on the premises is there to shop at their stores. Not go across the street. Not wander off. Not to have it as off-street parking unless you’re shopping there," Reboyras told colleagues.

"Please think about this and why we’re doing this. It’s better for the businesses. And we need to support it."

Moore described Innovative Parking, as the "largest, if not the only, parking management company that uses immobilization devices" in Chicago to ensure "paying customers have access to their business." 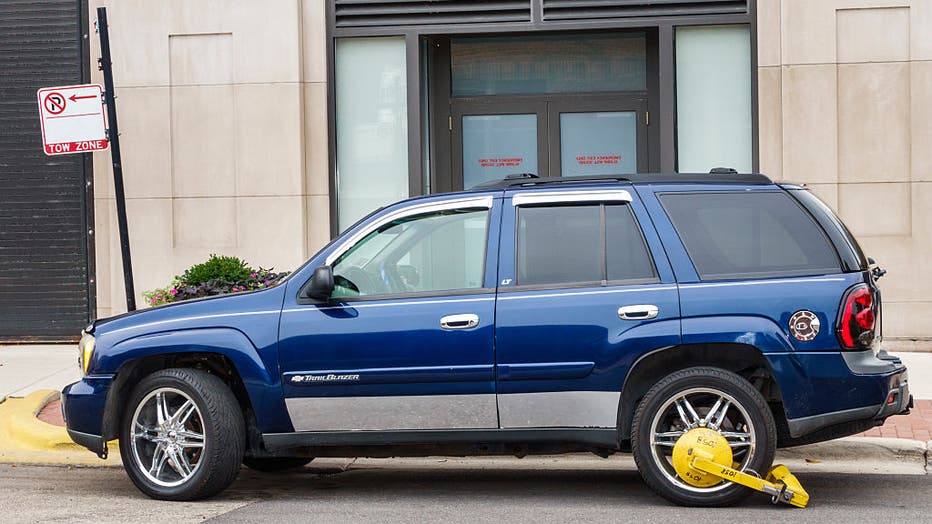 SUV vehicle with a wheel clamp, next to no parking sign. (Photo by: Jeffrey Greenberg/Universal Images Group via Getty Images)

Despite years of complaints by consumers and Council members, Moore portrayed Innovative Parking as "less onerous and more humane than the traditional method of towing one’s car," which he called "the only other method available to businesses to control their property."

To remove one of Innovative Parking’s wheel-locking boots, a motorist "pays a $170 fine at the location and is free to get in the car and drive away."

Towing companies "charge a base rate of $216, plus a storage fee of $45 a day. And if you’re driving a larger vehicle, such as an SUV, the towing fine can be anywhere from $520 to $700, depending on the size of the vehicles. Towing companies even charge motorcycles $500 and up to remove the boot. And storage fees for the larger vehicles and motorcycles are an additional $140 a day," Moore said.

Moore pointed to the hardships businesses endured during the stay-at-home shutdown triggered by the pandemic and the employee shortages, pricing and supply-chain storms they have weathered ever since.

"One of the things that businesses struggle against, particularly in our more densely populated areas of the city, is those that have parking lots to serve their customers often have their parking spaces taken up with people who use it as free parking and go shopping elsewhere, thereby taking spaces away from potential paying customers," Moore said.

"If a potential customer doesn’t see a space available to them to frequent the store, they move on. This parking immobilization device gives them an ability to prevent that from happening."

Ald. Anthony Napolitano (41st) was the most outspoken of the six dissenters.

Pointing to the "volatile times that we’re in," Napolitano predicted the citywide ordinance would trigger fights galore when motorists find their vehicles booted.

"Whether you’re in the right or in the wrong of that booting, that situation becomes extremely volatile — especially when an independent company is the one doing it to your vehicle," said Napolitano, who has been both a police officer and a firefighter in Chicago.

A citywide policy means "more of a volatile" atmosphere than the current situation, he said.

"We don’t have enough police. We don’t have enough cars on patrol to get to crime that’s occurring such as our burglaries, our strong-armed robberies, our shootings and our theft of catalytic converters. Now, our officers are gonna be dispatched to an argument in a parking lot over a boot. … I will guarantee you … it’s going to happen. I’ve seen it happen."

West Side Ald. Chris Taliaferro (29th), a retired police officer now chairing the Committee on Public Safety, made the opposite argument — that private towing on a lot that was once a magnet for drug dealing and prostitution in his ward has been the salvation for his crime-weary residents.

"Since private booting came in, I’ve had zero police calls to that lot," Taliaferro said.

Over the years, the burgeoning use of private booting has been mired in controversy.

In 1999, the City Council moved to prohibit private booting amid reports of price gouging and fisticuffs. Then, 18 months later, Council members put the weapon back in the arsenal of neighborhood retailers with the consent of the local alderperson, provided booting companies obtained city licenses and followed strict rules governing everything from fees, insurance and signs to staffing and credit card payments.

In 2004, private booters were required to also wait 15 minutes after a vehicle was parked before booting it. And, they had to post signs informing motorists who returned to their vehicles before the boot was fully applied of their right to demand removal at no charge.

In exchange for the 21.4% fee hike, the city’s then-four private booters were required to: pay a $1,000 licensing fee every two years; remove the boot at no charge if the owner returns to the lot before the boot is fully applied; register each location where the company is operating and pay a $100 fee for each site; and put their employees in uniforms and train them on boot installation and removal.

Also on Thursday, the License Committee agreed to give Chicago cabdrivers squeezed by skyrocketing gas prices a small measure of relief — at the expense of their dwindling pool of riders.

Business and Consumer Affairs Commissioner Ken Meyer was empowered to issue a "public vehicle industry notice" to terminate the surcharge whenever gasoline prices fall below $5 a gallon.