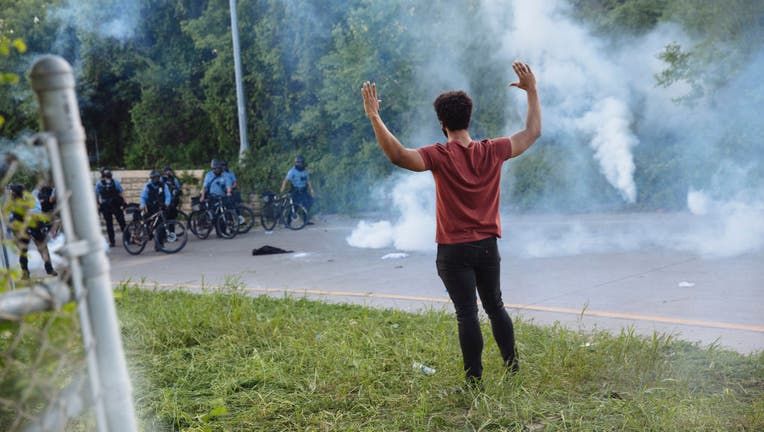 MINNEAPOLIS (FOX 9) - A group of protesters is filing a class-action lawsuit against the City of Minneapolis for the use of "unreasonable and excessive shows of force" during peaceful demonstrations in the days following George Floyd's death.

According to the lawsuit, Minneapolis Police Department used pepper spray, rubber bullets or tear gas on the crowds that were peacefully protesting, infringing upon their First Amendment rights.

"[The protesters] suffered loss of freedom and liberty, physical pain and discomfort, and severe emotional trauma and distress," read the lawsuit.

The lawsuit specifically points to when officers used pepper spray and tear gas to disperse the crowd after a semi tanker drove into a crowd of peaceful protesters on the I-35W on May 31. In the lawsuit, a protester claims officers sprayed the crowd as they were trying to get off the interstate through an exit ramp.

A semi tanker drove through a crowd of protesters on I-35W in Minneapolis. The crowd swarmed the truck and pulled the driver from the tanker.

Another incident described in the lawsuit happened on May 28 at a protest in downtown Minneapolis when three Minneapolis squad cars drove through the crowds while "dispensing pepper spray indiscriminately" out the vehicles' windows.

In the lawsuit, protesters also describe getting hit with tear gas on May 30 after the curfew went into effect. The lawsuit alleges the demonstrations had been peaceful until law enforcement moved in.

Amid the protests, journalists also were shot at with rubber bullets and were hit with tear gas or pepper spray.

The group of protesters are calling for the court to award monetary damages for the pain they suffered and to declare officers used excessive force. The lawsuit is calling for a jury trial.

Protests, both peaceful and violent, broke out in Minneapolis after Floyd died in police custody on Memorial Day. Bystander video showed an officer had placed his knee on Floyd's neck for nearly 10 minutes, while Floyd repeatedly stated he couldn't breathe. The four officers involved in the arrest were later fired and charged in connection to Floyd's death.