CHICAGO - The Original Rainbow Cone will be opening a new location in the Chicago suburbs on May 5.

Lombard will be the home to Rainbow Cone's second brick and mortar store, following a seasonal kiosk at Navy Pier.

It will be located at 498 E. Roosevelt Road.

The original location still stands in the Beverly neighborhood and has been serving Chicago for over 95 years.

In addition to a new location, Rainbow Cone is adding four new ice cream trucks to the lineup, including one available for private events.

The Lombard location will have an occupancy of 50 patrons indoors and will feature an expansive patio.

It will also feature a drive-thru, which is the first of its kind for Rainbow Cone. 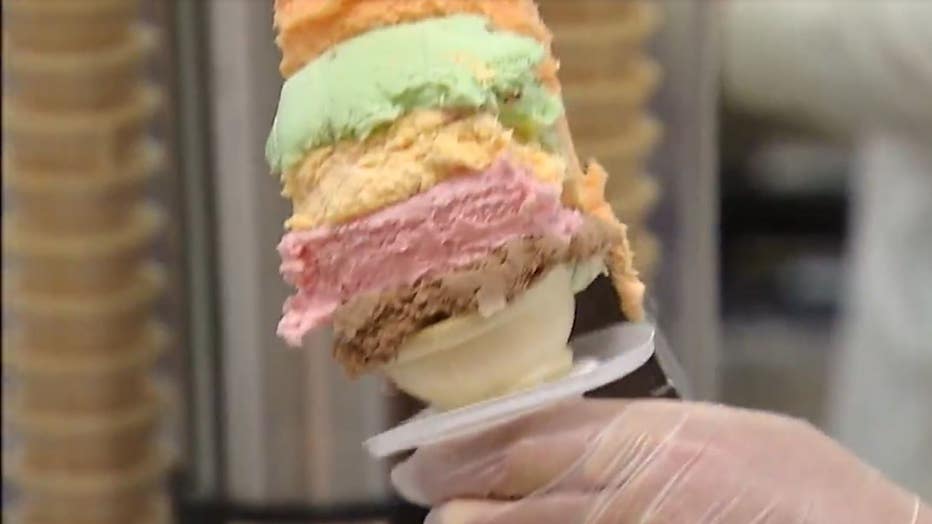 All menu items will be available for purchase at the drive-thru.

Guests will also be able to indulge in specialty items that are only available at the Lombard location, including mini donuts and Rainbow Mixers, where guests can blend mix-ins with Rainbow Cone’s signature soft-serve.

"As we work to expand our locations and showcase our new adventures, we are excited to share our love for Rainbow Cone with even more communities," said Lynn Sapp, co-owner and Granddaughter of Rainbow Cone’s Founder. "Rainbow Cone is not just about the cone, it’s about creating family memories that last a lifetime."

Rainbow Cone is also adding to the family by partnering with the third-generation Buonavolanto family.

The two families will work hand in hand to expand Rainbow Cone and carry on the traditions that originated in 1926, the business said.

"To me, it’s more than just a cone. It’s about family. It takes people who are driven, willing to work hot days, long hours, weekends, and essentially, dedicate their life to it. As third-generation food business owners themselves, The Buonavolanto family is the answer," said Sapp. "After meeting them and watching their family around the table, I immediately knew I had made the right decision. The third-generation Buonavolanto family understands how important it is to honor the legacy of Chicago’s favorite cone. Their only goal is to help bring that cone to as many people as possible."

Rainbow Cone will also be hosting a social media giveaway on its Instagram and Facebook platform for three winners to receive free ice cream for a year.

The winners will be announced on May 3.