A teen in North Dakota showed just how cold it got in the state on Feb. 13, 2021 with a bowl of hot ramen noodles. Credit - Erin Sio via Storyful

DICKINSON, N.D. - If anyone was wondering how cold it got in North Dakota over the weekend, look no further than this floating bowl of ramen noodles.

Isis Sio, who lives in Dickinson, North Dakota, which is about 100 miles west of Bismarck, showed just how cold it was outside on Feb. 13 with a bowl of hot noodles.

Video posted by her mother, Erin Sio, shows the bowl as it’s left outside with what appears to be chopsticks and noodles sticking straight up — completely frozen in place.

Erin Sio told Storyful that it took about 20 minutes to freeze the noodles solid from boiling hot.

The National Weather Service (NWS) in Bismarck had forecast "life-threatening" cold for much of the state, with wind chills dipping as low as -62 Fahrenheit in some areas.

"Tonight will be the coldest night across western and central North Dakota since January 2019. This is a very serious situation! Do not be overconfident or underestimate this cold," the agency wrote on Twitter. 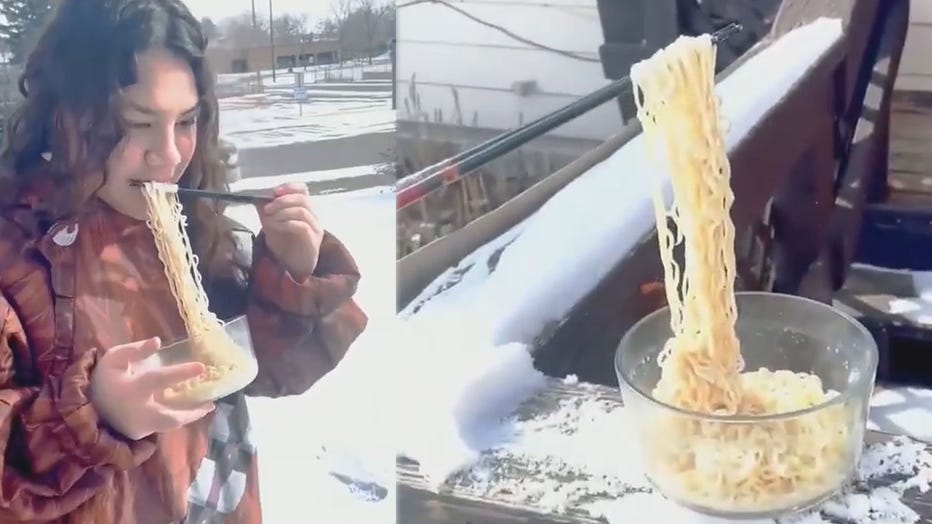 Isis Sio is pictured with a bowl of hot ramen noodles on Feb. 13, 2021 in Dickinson, North Dakota. Her mother said it took about 20 minutes for the noodles to freeze solid outside in the bitter temperatures. (Photo credit: Erin Sio via Storyful)

On Feb. 14, the NWS reported -30.3 degrees Fahrenheit in Bismarck. The agency added that it was working to confirm a -59.6 degree Fahrenheit reading at Lake Metigoshe State Park, located near the Canadian border.

Millions of people were under winter weather advisories Monday as a major winter storm brought snow, ice and frigid temperatures from coast to coast. The unprecedented, historic weather pattern was expected to bring the coldest air in decades and heavy snow over the Southern Plains and Mississippi Valley.

In Texas, winter weather prompted rotating power outages for many in the state and thousands of canceled flights. By midmorning Monday, 3,000 flights had been canceled across the country, about 1,600 of them at Dallas/Fort Worth International and Bush Intercontinental airports in Texas. At DFW, the temperature was 4 degrees Fahrenheit — which was 3 degrees colder than Moscow.

Accumulating ice between a tenth and a quarter of an inch was possible across eastern Louisiana, Mississippi, central Tennessee, Kentucky and over into the West Virginia and Ohio border region, forecasters said. Up to 12 inches of snow was expected across parts of the southern Plains into Monday.

The region had been gearing up for the winter weather for the better part of the weekend. Texas Gov. Greg Abbott issued a disaster declaration (https://apnews.com/article/arkansas-houston-oklahoma-storms-greg-abbott-45217d4d7b89fff8a9e3ad2fa7621506) for all of the state’s 254 counties. Abbott, Oklahoma Gov. Kevin Stitt and Arkansas Gov. Asa Hutchinson each activated National Guard units to assist state agencies with tasks including rescuing stranded drivers.

President Joe Biden also declared an emergency in Texas in a statement Sunday night. The declaration is intended to add federal aid to state and local response efforts.

The National Weather Service said Sunday that the forecast through early Tuesday calls for 8 to 12 inches of snow in central Oklahoma, and 4 to 8 inches in an area extending from eastern Texas to the Ohio Valley in the Northeast.

RELATED: Snow day movies: Here are some free and brr-illiant films to stream on Tubi