CHICAGO - Rare and antique military items with a Tiffany & Co. touch are about to hit the auction block.

Rock Island Auction Company in Rock Island, Illinois, is putting three items with war ties up for auction during its event from Dec. 9 to 11.

The auctioning expert explained that while today’s public thinks of Tiffany & Co. as a fine jewelry seller, the luxury brand has some of its earliest roots in Civil War-era weaponry.

"Tiffany & Co. is renowned as an American artisan," he said. 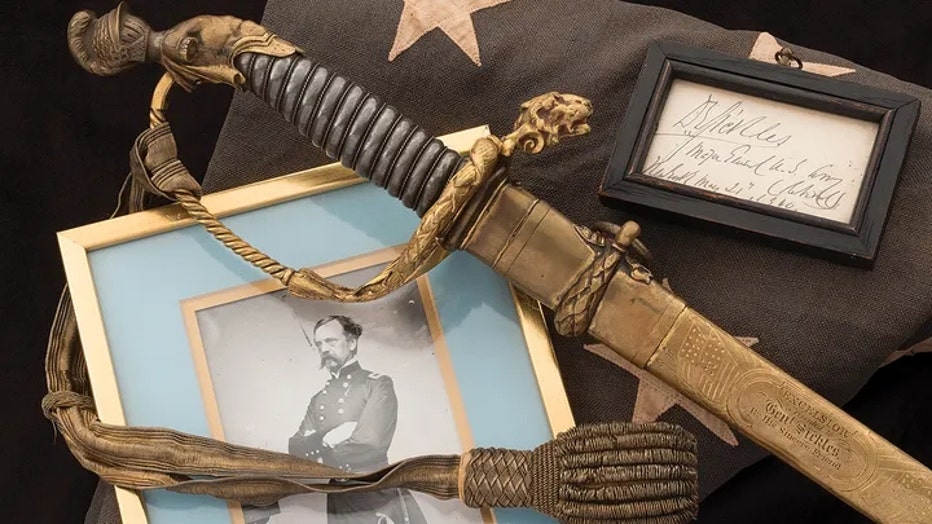 "Most of us know them for their silversmith capabilities — more contemporary for their jewelry and engagement rings ... but it wasn’t always that way."

Tiffany & Co. was known for its "fine presentation" of officers’ swords during wartime, Kolander added.

"Their emphasis on craftsmanship is apparent even 160 years ago," he said. "They’re superb objects."

He described these "atypical" pieces as a "prize" for sword collectors and other interested parties. 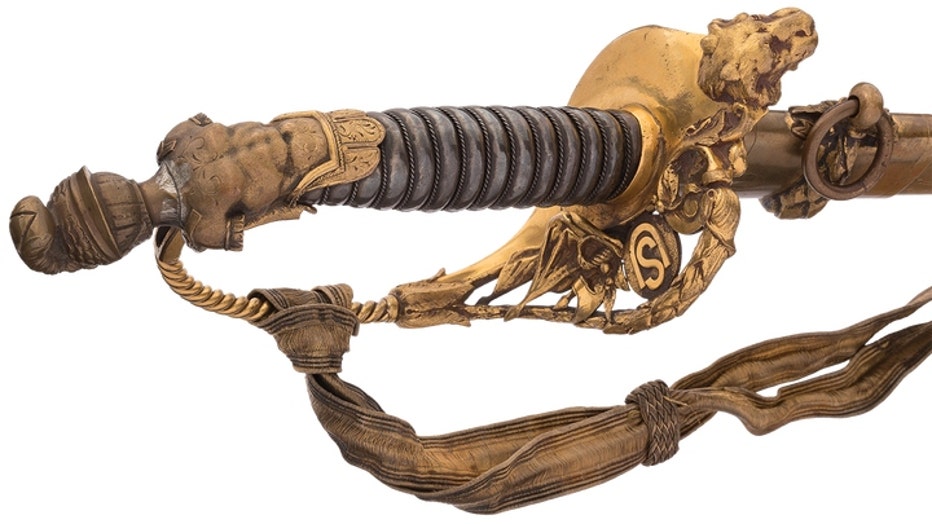 A knight's head is carved into the handle on this sword that belonged to Gen. Daniel Sickles. (Rock Island Auction Company)

The first item on the auction block is the Gen. Sickles Excelsior Brigade sword made by Collins and embellished by Tiffany & Co.

"Their emphasis on craftsmanship is apparent even 160 years ago."

The handle is crafted into a knight’s head with a detailed torso, while the cross guard has a lion’s head carved into it.

"Excelsior" is etched into the scabbard, which signifies its birthplace of New York. 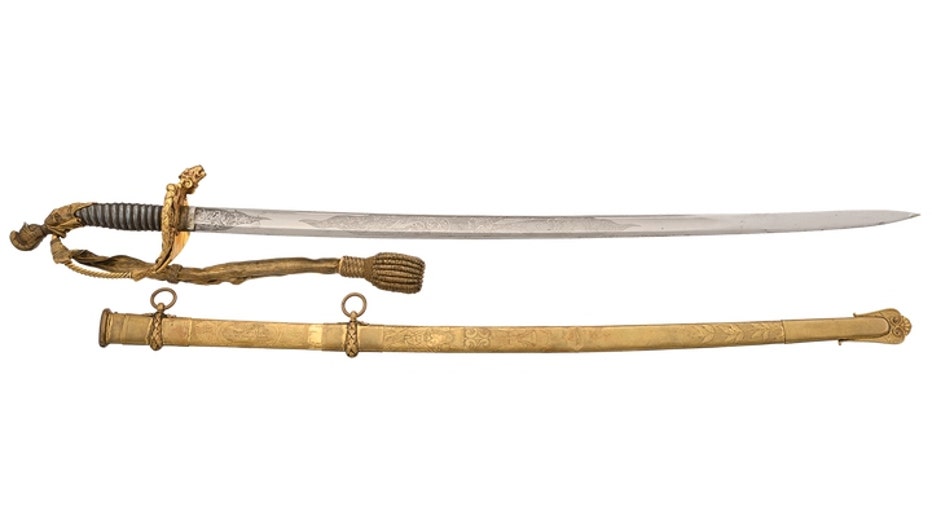 The Civil War Excelsior Sword that is going up for auction is decorated in delicate Tiffany & Co. detail and embellished in gold. (Rock Island Auction Company)

This also refers to Sickles’ military unit in the Union Army, also known as the Excelsior Brigade.

The rest of the inscription reads, "Presented to Gen. Sickles by his sincere friend."

The scabbard and blade are decked out in foliage designs and patriotic motifs, such as American flags and an eagle. 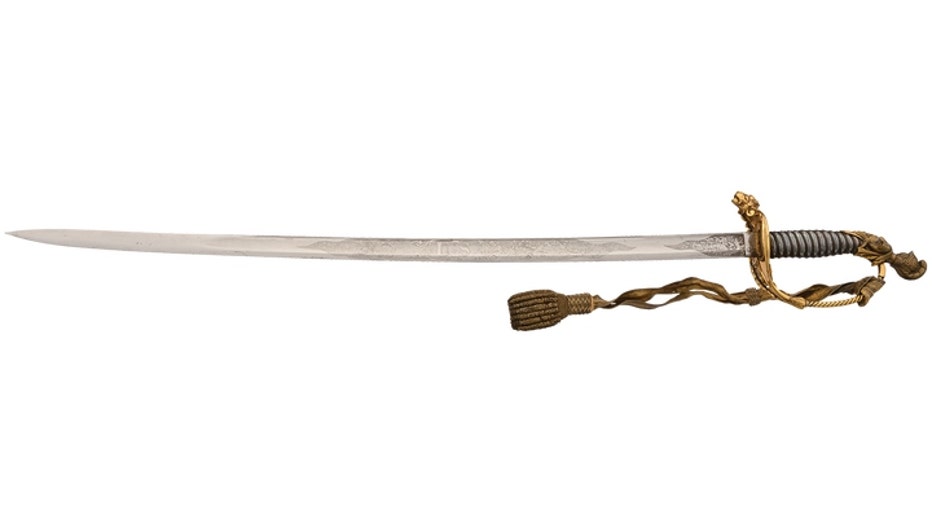 The blade also has Tiffany & Co.’s marker acid-etched into it and is dated 1861.

"They definitely wanted people to know that this was their work, and they were proud of it," Kolander said.

"All the etching is immaculate and detail-oriented. It’s a fantastic piece belonging to a medal of [an] honor-winning Gettysburg commander." 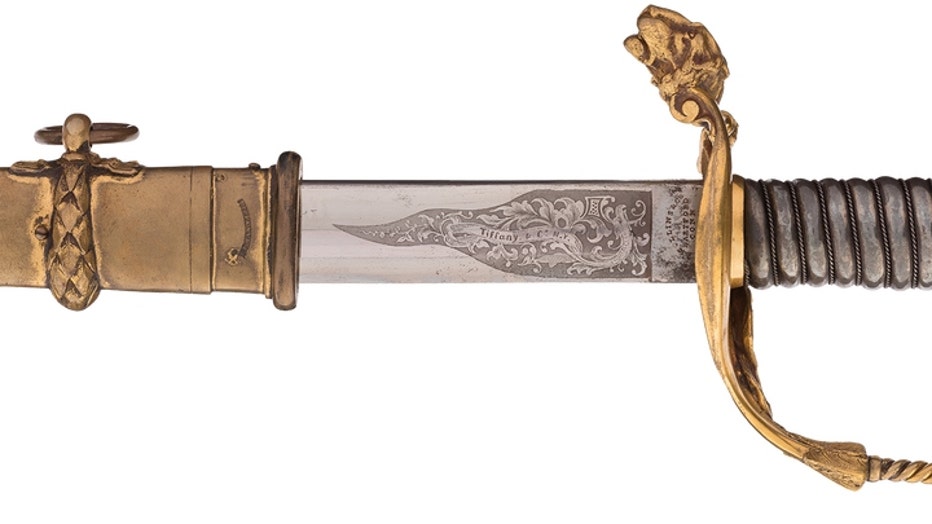 The inscription 'Tiffany &amp; Co. N.Y.' is etched into the base of the blade on Gen. Sickles' sword. (Rock Island Auction Company)

The Gen. Sickles Excelsior Brigade sword is expected to fetch $30,000 to $50,000 at auction, the auction company said.

The second item up for auction is another Civil War-era sword created in partnership with Tiffany & Co. and Prussia’s Peter D. Luneschloss Company.

The sword was presented to Lt. Col. Horace A. Manchester by the U.S. Marine Artillery, as labeled on an inscription on the scabbard. 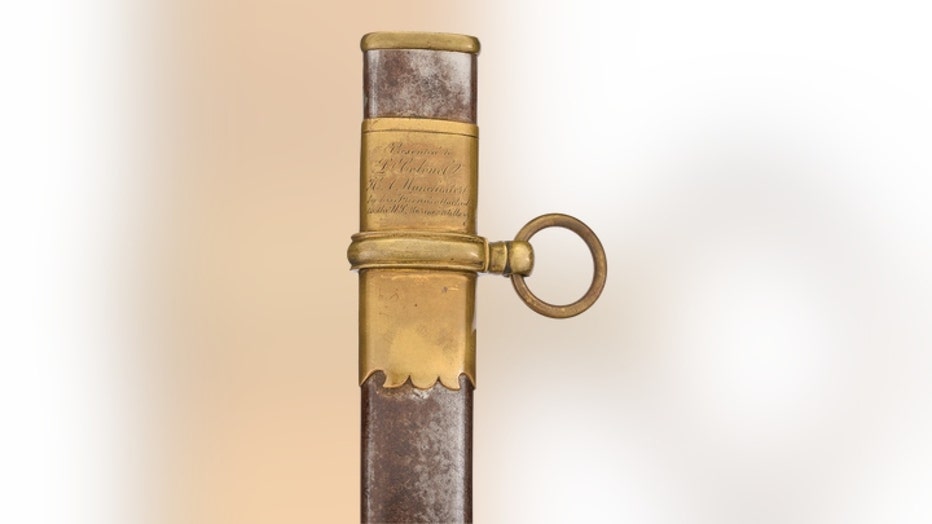 The inscription in the officer's sword reads, "Presented to Lt. Colonel Manchester by his friends attached to the U.S. Marine Artillery." (Rock Island Auction Company)

Kolander pointed out that this sword looks "significantly different" due to its ironclad appearance.

This rugged look, he said, is on brand with the kind of cut-throat combat Manchester and his artillery took part in years ago.

"They [were] actions of incredible violence that we don’t always hear about when it comes to the Civil War," he said. 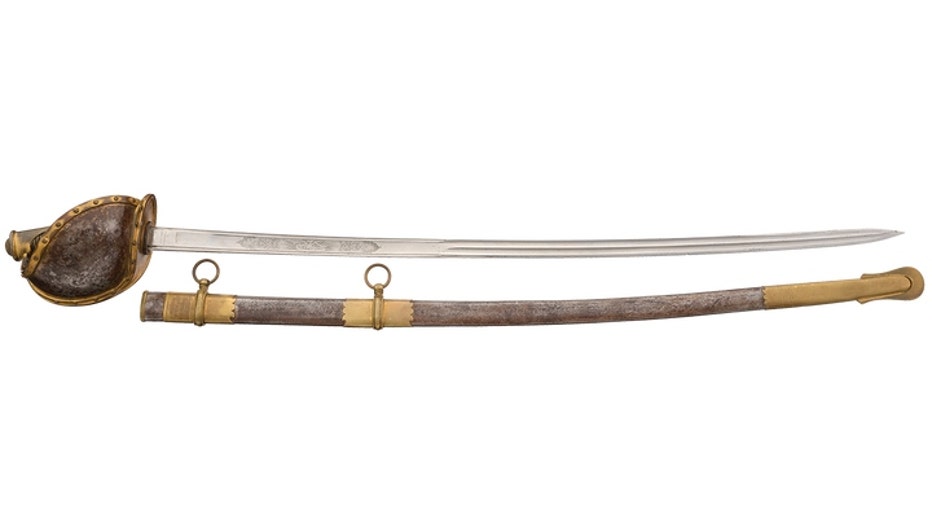 "So, to have this rough and rugged-ready sword — very appropriate for what he was doing."

Kolander said the "very unusual" use of iron throughout the sword is evidence that the weapon wasn’t built for being pretty, even though it is "absolutely gorgeous."

Perhaps the most fascinating feature is a small chip on the edge of the blade, said Kolander.

The blade comes with fine etchings and patriotic motifs, including the Great Seal of the United States, as well as Tiffany & Co.’s marker at the base.

But perhaps the most fascinating feature is a small chip on the edge of the blade, which Kolander said confirms the sword was used in combat. 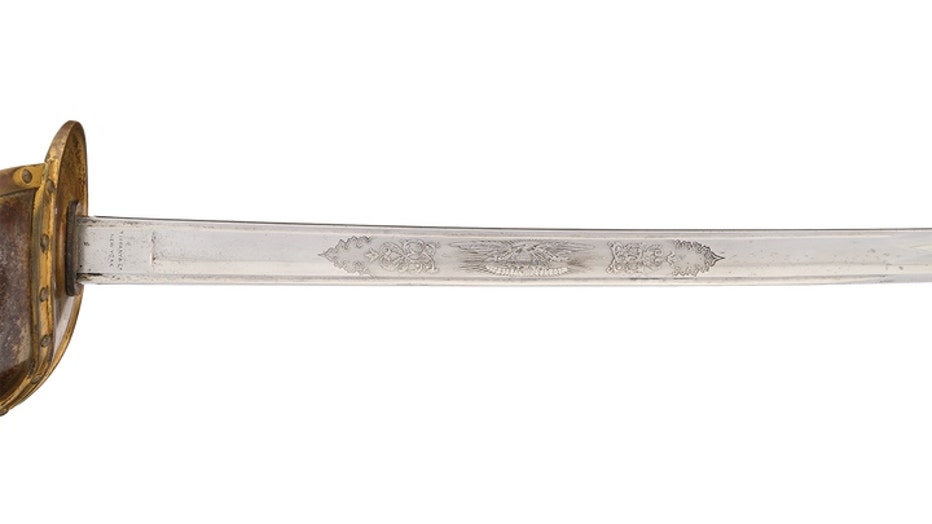 The Great Seal of the United States is etched into the blade of a Civil War officer's sword by Tiffany & Co. (Rock Island Auction Company)

The sword is expected to sell for $4,500 to $6,500, which Kolander considered an "opportunity" for collectors who want a Tiffany & Co. Civil War relic.

These Tiffany touches have shown up in naval aviator badges, which will be auctioned off by Rock Island as item no. 3.

Out of a set of 14 badges — including some 14-karat gold from both world wars — one pin, in particular, has been singled out as a Tiffany & Co. treasure from amid the Great War. 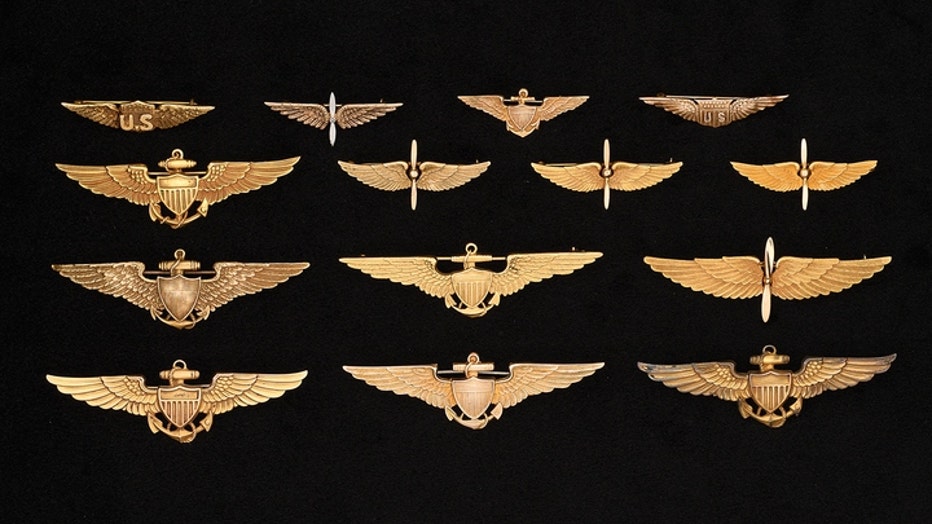 Fourteen naval aviator badges from World Wars I and II are going up for auction. (Rock Island Auction Company)

Kolander noted the ornate craftsmanship of the piece, from the fine pinions on the wings to the stripes on the shield.

"It’s a very small piece with such a neat, large significance," he said. 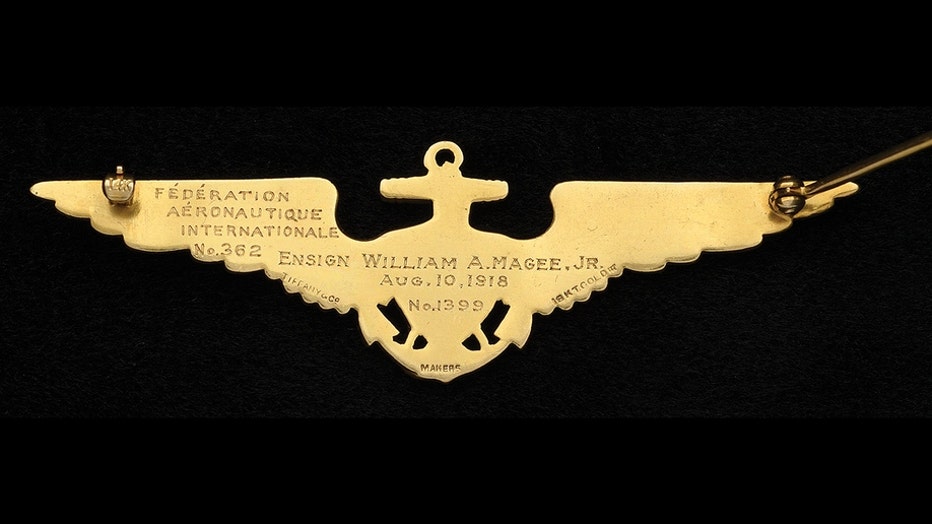 "Compared relatively to some of the other badges, the Tiffany one does stand out a bit," he said. 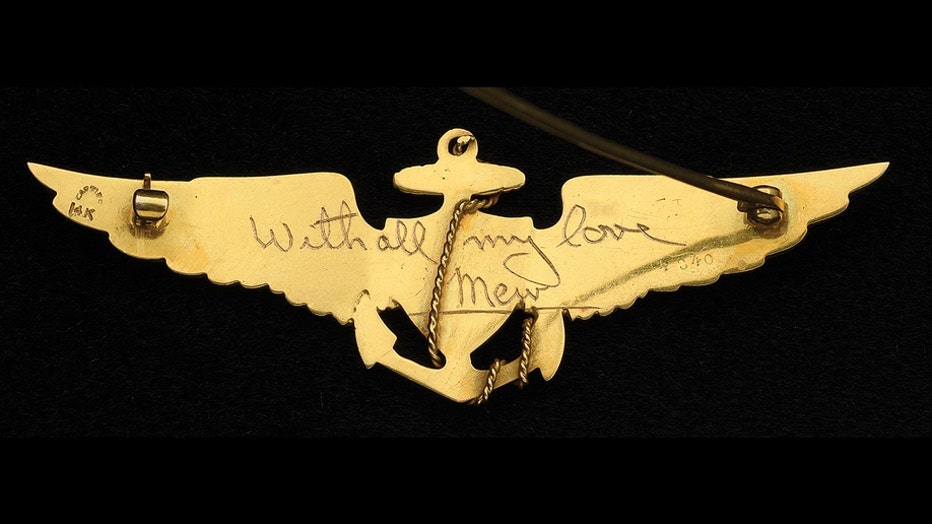 A 14-karat aviator badge with a personal inscription on the back. (Rock Island Auction Company)

The weekend-long auction will include nearly 5,000 items.

"How this is not in a museum is absolutely beyond me," Kolander said of the Lincoln Civil War-era item. 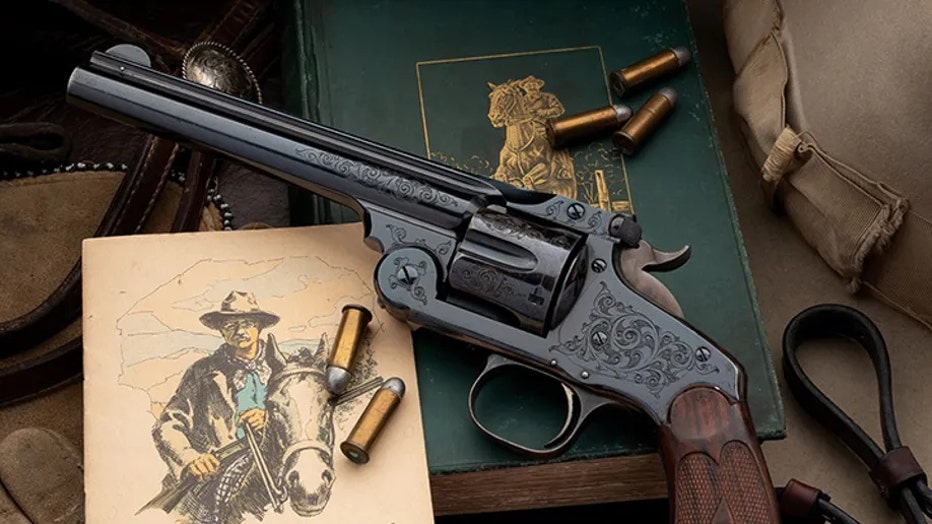 Rock Island specializes in selling fine and collectible arms as the no. 1 firearms-based auction house in the world.

Kolander added that Rock Island has been at the "top of the industry" since 2003 as it continues to sell collectibles such as swords, military artifacts and western art. 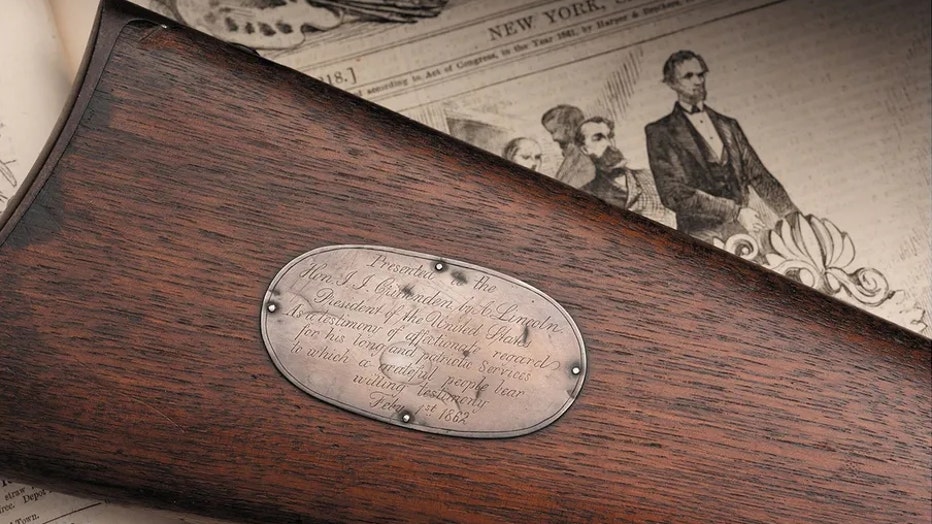 "There’s an opportunity [for bidders] in the firearms collectibles field — they’re really undervalued," he said. "They’re an atypical canvas."

Those looking to place bids in Rock Island’s upcoming auction can visit rockislandauction.com for more detail.