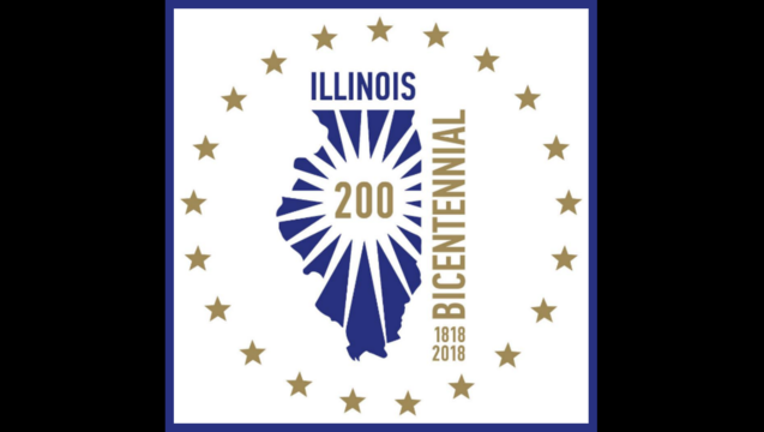 SPRINGFIELD, Ill. (AP) - Illinois Gov. Bruce Rauner kicked off planning for the state's 200th birthday Thursday by unveiling the bicentennial logo at the historic Old State Capitol in Springfield, where Abraham Lincoln once served in the Legislature.

Rauner showed off the gold-and-blue symbol with its designer at the first meeting of the Illinois Bicentennial Commission , which was formed to organize the festivities in 2018.

"We reflect virtually every aspect of America," the Republican said. "We are a crossroads of the nation."

The logo, which was designed and donated by Ben Olson of the Schaumburg-based public relations firm 3 Monkeys and an Aardvark Studios, reflects those strengths, bicentennial organizers said.

Twenty-one gold stars - marking Illinois' 1818 entry into the union as its 21st state - surround a blue outline of the state. In the middle of the bicentennial logo is a gold-colored "200" in a white sunburst with rays emanating in all directions.

"The sunburst in the middle of the state outline portrays the impact Illinois has made on the country and the world over the past two centuries and the bright future we aspire to for the next 200 years," said Stuart Layne, the commission's executive director.

Although Native Americans have lived in Illinois for centuries - Cahokia in southern Illinois had an advanced city of as many as 40,000 people 1,000 years ago - French explorers Jacques Marquette and Louis Jolliet were the first Europeans to record their sighting of Illinois in 1673. It was claimed by the French and later the British before joining the U.S. as a territory in 1787.

Lincoln was elected to the state Legislature in 1834, when the young state was just 16 years old.

Rauner, a wealthy private-equity investor who often calls himself a "volunteer" because he accepts a nominal $1 annual salary as governor, expressed his excitement about the upcoming celebration.

"I want this to be a better place for everyone," he said. "This is my chance to give back. I want to make a difference; I want to do it on a bipartisan basis."

The commission is chaired by Gloria Castillo, president of nonprofit Chicago United, and Randy Dunn, president of the Southern Illinois University system, and includes 40 members drawn from different career fields across the state. Its goal is to publicize the state and its achievements and generate interest among young people in its history.