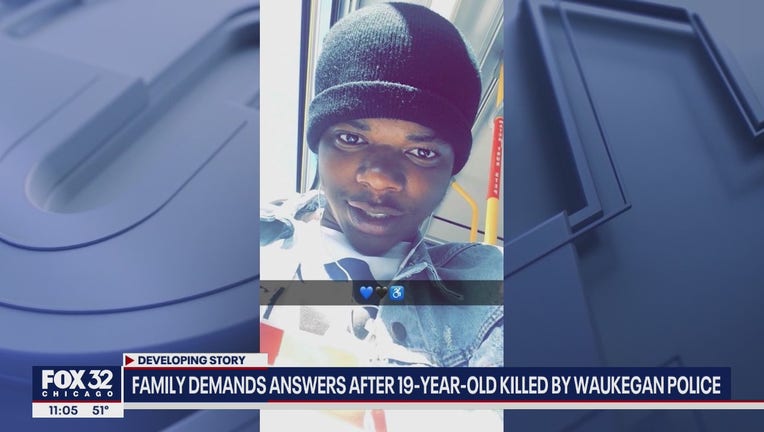 WAUKEGAN, Ill. - The mother of a Black woman who was injured in a police shooting in suburban Chicago that left a Black man dead said the couple did nothing to provoke the officer.

Marcellis Stinnette, 19, was killed and his girlfriend and the mother of his child, Tafara Williams, was wounded when a police officer in Waukegan opened fire Tuesday night after police said Williams’ vehicle started rolling toward the officer following a traffic stop.

Williams’ mom said she visited her daughter in the hospital, where she is in serious condition.

MORE: Family demands answers after their son was shot, killed by Waukegan police

The woman’s comments come as the relatives of the two who were shot, activists and even the family of a man who was shot by police in nearby Kenosha, Wisconsin, in August called on authorities to release more information about the Waukegan shooting as well as any video that might have shown what happened.

Williams’ mother said her daughter asked about Stinnette, but that she did not have the heart to tell her that he was dead.

Police have said that the pair were in a vehicle that fled a traffic stop late Tuesday. That vehicle was spotted a little later by another officer. While that officer approached the vehicle, it began moving in reverse, police said, and the officer opened fire. No weapon was found in the vehicle, police said.

The officer who shot the couple is Hispanic and a five-year veteran of the Waukegan Police Department. The officer who conducted the original traffic stop is white, police said.

A protest that attracted a few dozen people started at about noon Thursday with a rally near the site of the shooting in which activists demanded the release of police video of the shooting.

One activist, Chris Blanks, said the video is particularly important because the police version of events and the version that Johnson said her daughter shared with her appear to contradict each other.

The rally was peaceful, as was the march to police headquarters.

“We’re not here to rip up our own town,” Clyde McLemore, the Lake County chapter president of Black Lives Matter, said before the rally and march.

The body camera and squad car video that activists want released to the public have been turned over to Illinois State Police, which is investigating and will present findings to the local prosecutor’s office, Waukegan police Commander Edgar Navarro said.

Waukegan is about 15 miles (24 kilometers) south of Kenosha, Wisconsin, where protests erupted after Jacob Blake, a Black man, was left paralyzed after being shot seven times in the back by police on Aug. 25. Kyle Rittenhouse, 17, of nearby Antioch, Illinois, is accused of shooting and killing two protesters two nights later.

Rittenhouse is scheduled to appear in court in Waukegan next week for a hearing on whether he should be returned to Wisconsin to face homicide charges.

A sister and uncle of Blake both attended Thursday’s rally.

Waukegan Mayor Sam Cunningham on Wednesday asked residents to wait until all the facts are known before reacting to the shooting. Lake County State’s Attorney Michael Nerheim noted that it may be several weeks before the investigation is complete.

Waukegan, about 40 miles (64 kilometers) north of Chicago, was once overwhelmingly white before its industrial jobs began drawing Blacks from Chicago and the South in the 1920s. In the 1960s, its Hispanic population grew, and Black and Puerto Rican residents often allied against school segregation, housing discrimination and unequal pay, according to Josh Bill, president of the Waukegan Historical Society.

In one racial flashpoint in the early 1920s, white sailors from a nearby naval base surrounded and threatened Black residents of a boarding house. Microfilm copies of newspapers from the period included ads for Ku Klux Klan gatherings and an expose estimating 400 locals belonged to the group, said Bill, of the Waukegan Historical Society.

In 1966, some residents of the city’s predominantly Black and Puerto Rican neighborhoods clashed with police in unrest that left businesses damaged.