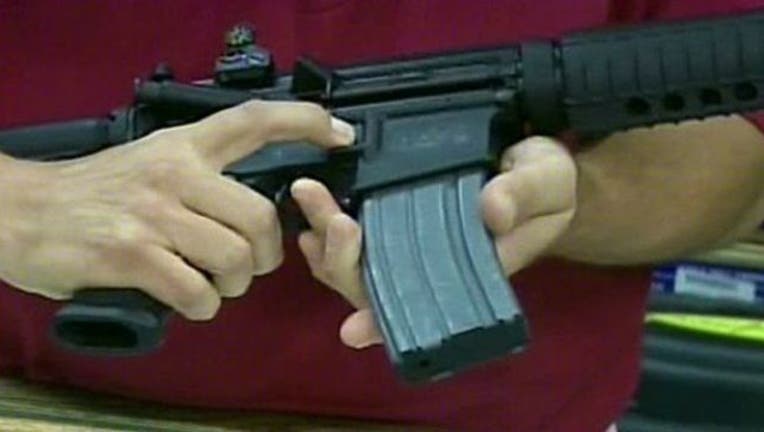 BOSTON (AP) - Once a rarity on campuses, semi-automatic rifles are becoming a standard part of the arsenal for college police forces — firepower they say could make a difference the next time a gunman goes on a rampage.

The weapons are rarely seen in public and often stashed away in cruisers or at department headquarters, and many schools won't talk about them. But federal data and Associated Press interviews and requests for records reveal that over the past decade, at least 100 U.S. college police agencies, and probably many more, have introduced rifles or acquired more of them.

The arms buildup has raised tensions on campuses, with debates over the need for such weaponry flaring at schools like Boston's Northeastern University, the University of Maryland and Florida State. A similar outcry over police use of military-style gear erupted in 2014 after the violence that broke out in Ferguson, Missouri.

"A bad shot with a rifle is better than a good shot with a handgun," said Skip Frost, who until February was deputy chief of police at the University of Illinois at Urbana-Champaign, which offers a semi-automatic rifle to every officer.

Some colleges have made the weapons available to SWAT-type units of officers who respond to risky situations; some have issued the guns to patrol officers. Either way, police are authorized to take up their rifles only in extreme cases, such as a shooting or reports of an armed person.

Most states also require police officers to undergo weapons-proficiency training at least once a year. Many campuses receive training from the FBI and U.S. Justice Department, which teach officers how to move quickly through buildings to take down a shooter.

"The reality is that these are not always handgun situations," said FBI agent Katherine Schweit, the bureau's senior executive in charge of active-shooter matters. "We can't tell a university realistically what's acceptable in their community — that's up to them — but we recognize the struggle that every community faces because many of these shooters come to the scene with a long gun."

Bill Taylor, president of the International Association of Campus Law Enforcement Administrators, said he hasn't heard of any case in which a campus officer fired a rifle on the job. But police have broken out the weapons several times.

In December, for example, police at the University of North Carolina at Chapel Hill responded with rifles after a false report of a gunman on campus. At least one Florida State officer responded to a 2014 shooting with a rifle but didn't shoot the gunman because other officers were in the way. Police killed the shooter with handguns.

On some campuses, protesters have argued that black students face a greater risk of being shot with one of these weapons.

At Northeastern, the acquisition of semi-automatic rifles was criticized this year by Boston police, who said that the guns are unnecessary with city police so close to campus and that officers could end up shooting each other in the confusion. They also said the use of such high-powered weapons in a crowded neighborhood raises the risk of innocent people getting hit by stray fire.

"I actually don't feel as safe," said Chelsea Canedy, a junior at Northeastern who leads a student coalition opposed to the rifles. "You're seeing across the United States this militarization of many college campuses."

In a 2012 survey by the U.S. Bureau of Justice Statistics, 75 percent of the nation's campus police forces were armed with some type of gun, up from 68 percent in 2005. The 2007 Virginia Tech massacre, in which a student killed 32 people, is widely believed to have played a role.

The federal government provided a glimpse into the spread of rifles in 2014 when it started publicizing a list of military equipment on loan to police forces across the country. The newest figures this year show that 91 campus police forces are armed with 817 rifles that were obtained through the program over the past decade, along with other tactical gear. But colleges can buy firearms directly, as well.

The AP sent records requests this year to 20 of the nation's largest public universities for a list of their guns and for invoices from weapons purchases. Most of them refused, with several of them, such as Arizona State and Ohio State, saying releasing the information would jeopardize campus safety.

Documents provided by four universities, though, illustrate a rapid buildup of rifles. Florida State bought 26 semi-automatic Bushmaster rifles from private sellers between 2012 and 2014, along with 10 other rifles acquired through the military surplus program. The University of Illinois bought 47 AR-15 rifles in that span. Purdue University received 25 rifles from the surplus program in 2007 and separately bought 17 more, records show.

After decades without giving guns to its police, Princeton University announced in November that it, too, would equip officers with rifles in case of a campus shooting.

"As law enforcement, it's our responsibility to be prepared for the worst-case scenario," said Frost, the former deputy chief at Illinois. "If we can't protect ourselves, we can't protect the community."