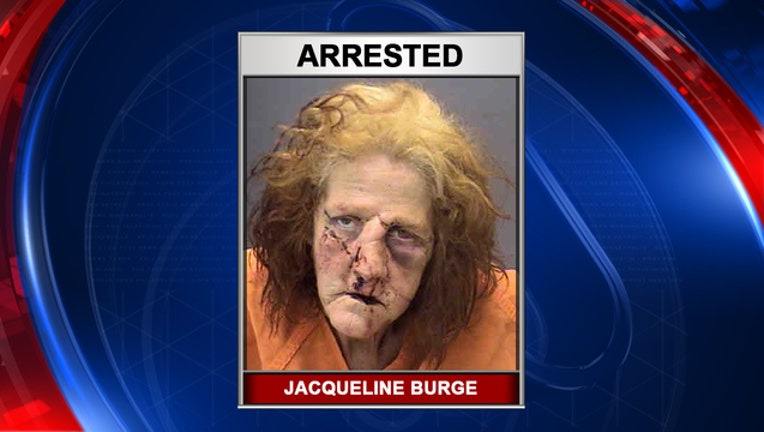 NOKOMIS, Fla. (FOX 13) - A Venice woman led deputies on a chase where she crashed into two deputies' vehicles, drove the wrong way on Interstate 75, and caused a head-on collision with another vehicle before being arrested, deputies say.

The Sarasota County Sheriff's Office says the woman, a convicted felon, was also in possession of methamphetamine, prescription pills, and several ID cards.

Deputies say it started when they tried to pull over 54-year-old Jacqueline Burge on Edmondson Road in Nokomis Tuesday morning.

Deputies say she continued to flee, merging onto I-75 southbound where she lost control, crashed into another deputy's cruiser, and then fled northbound in the southbound lanes.

Burge was finally arrested after hitting a vehicle head-on and trying to flee the scene on foot, deputies say.

The sheriff's office says Burge has more than a dozen prior arrests in Sarasota County for crimes including grand theft, burglary, the sale of synthetic narcotics, prostitution, and drug possession. She was spent time in prison on charges from Sarasota and Manatee counties.

Deputies say the driver Burge hit did not suffer injuries.