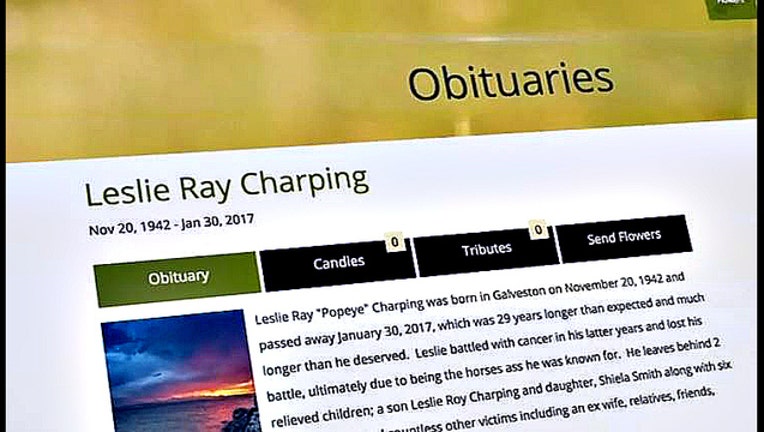 GALVESTON, Texas (FOX 32 News) - Leslie Ray 'Popeye' Charping of Galveston, Texas, died on Jan. 30 after a fight with cancer, "29 years longer than expected and much longer than he deserved."

That was just the beginning of a savage obituary written by Charping's daughter and posted online at carnesfuneralhome.com.

“He leaves behind 2 relieved children; a son Leslie Roy Charping and daughter, Shiela Smith along with six grandchildren and countless other victims including an ex-wife, relatives, friends, neighbors, doctors, nurses and random strangers.

“At a young age, Leslie quickly became a model example of bad parenting combined with mental illness and a complete commitment to drinking, drugs, womanizing and being generally offensive.

Leslie's hobbies included being abusive to his family, expediting trips to heaven for the beloved family pets and fishing, which he was less skilled with than the previously mentioned. Leslie's life served no other obvious purpose, he did not contribute to society or serve his community and he possessed no redeeming qualities besides quick witted sarcasm which was amusing during his sober days.

“With Leslie's passing he will be missed only for what he never did; being a loving husband, father and good friend.  No services will be held, there will be no prayers for eternal peace and no apologies to the family he tortured. Leslie's remains will be cremated and kept in the barn until "Ray", the family donkey's wood shavings run out. Leslie's passing proves that evil does in fact die and hopefully marks a time of healing and safety for all."