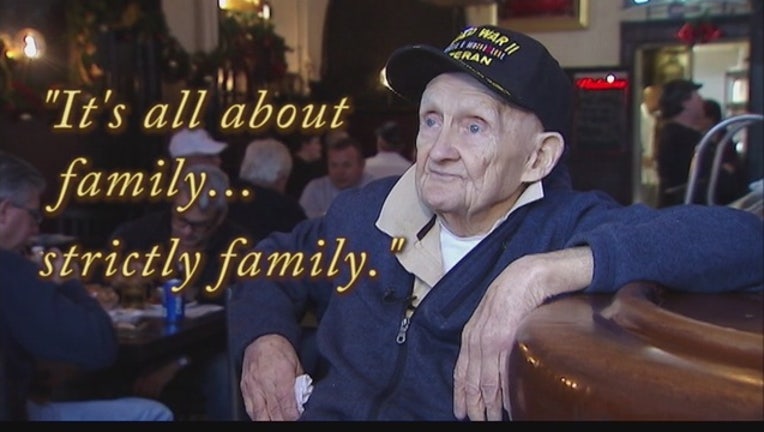 His family had to protect Mr. Schaller from crowds that wanted to hug and high-five him and shake his hand after the White Sox won the World Series in 2005.

“We had to keep him away from everybody — they were high-fiving him from everywhere,” said his daughter, Betty Jo Bailey. “Everybody wanted to be his friend.”

Relatives say he was washing dishes at Schaller’s when Herbert Hoover was president. The bar-restaurant, founded in 1881 by his German grandfather, George Schaller, is the holder of Chicago liquor license No. 6. The Schallers call it the city’s oldest tavern. “I don’t think there is anybody else that comes close,” said his son, Jay.

“He worked forever,” said another daughter, Kim Shinnick. “He lived above the restaurant. If he wasn’t in the Pump, he was just taking a cat nap.”

Mr. Schaller died at 8:30 p.m. Saturday at home. Until three months ago, he could walk without assistance. Two days before he died, he navigated through the tavern with the aid of a walker. And even though he’d lost all his teeth, he recently enjoyed a Schaller’s steak. “We’d have to cut it up very, very small,” Shinnick said.

The barman liked vodka and scotch but stopped drinking 20 years ago.

He didn’t give up his gambling. After he died, his family found $10 tucked in the WWII veteran cap he always wore — for use at the riverboat casinos he loved to visit. Asked which boat was his favorite, Shinnick said: “All of them.”

He met Betty, his future wife, in the second grade at St. Sabina’s parish. Their wedding procession was a Stockyards spectacle. “They had a horse and carriage and 18 horses from the Stockyards, and cowboys with the horses,” Shinnick said.

They had eight children whom they taught to pull together as one. He referred to his daughters as his “hairpins,” an Irish slang term that can be a barb, an endearment or both. A son, Jay, turned out to be a Cubs fan, Bailey said. Mr. Schaller used to joke “my mom must have dropped him on his head when he was a baby,” she said.

His children said he was wounded in World War II, when he served as a mortarman at the Battle of Leyte Gulf, history’s biggest sea skirmish. He never wanted to talk about it, even when relatives asked him questions. “We asked him where he was [in the war], and he just shook his head,” said Shinnick.

Over the years, he met countless athletes, politicians and VIPs. The late White Sox owner Bill Veeck was a favorite. “Bill Veeck had a wooden leg and he had an ashtray built into the wooden leg,” said Shinnick. “One day, he was at Schaller’s and he took a $20 bill, autographed it, and threw it up at the ceiling with a pat of butter. . . . That thing stayed up there for years. We painted around it.”

“Generations of White Sox fans visited Schaller’s Pump before and after games, not to mention a few players and front-office staff over all the years,” team spokesman Scott Reifert said. “For many, a visit there was part of the tradition of attending a Sox game passed down through families. Jack Schaller was a famous fixture at his restaurant, in addition to being a well-known member of the Bridgeport community, and an avid, avid White Sox fan who suffered with every loss and celebrated every victory. We send our thoughts to all of his friends and family at today’s news.”

Mr. Schaller enjoyed old war movies, Big Band music, and the smooth-as-puree crooning of singer Perry Como. Mr. Schaller delighted in throwing out a first pitch at a Sox game and at being recognized for his military service when he was invited onto the ice at a Blackhawks game.

Shinnick said her father greeted each woman who entered the tavern. “Every lady who came in, he made sure he took off his hat and tipped it and said hello.”

He is also survived by his daughters, Jill Nolan, Sue Weber and Colleen Sheehan; another son, Jim; 18 grandchildren and six great-grandchildren. His son Jack died before him. Services are being handled by Thomas McInerney’s Sons Funeral Homes. The wake is from 2 to 9 p.m. Wednesday at Nativity of Our Lord Church, 653 W. 37th St. The funeral Mass is at 10 a.m. Thursday. He will be laid to rest beside Betty Schaller at Holy Sepulchre Cemetery.

The Schallers plan to bury their father in his World War II veteran cap, with a Schaller’s shirt and a White Sox shirt tucked alongside him.