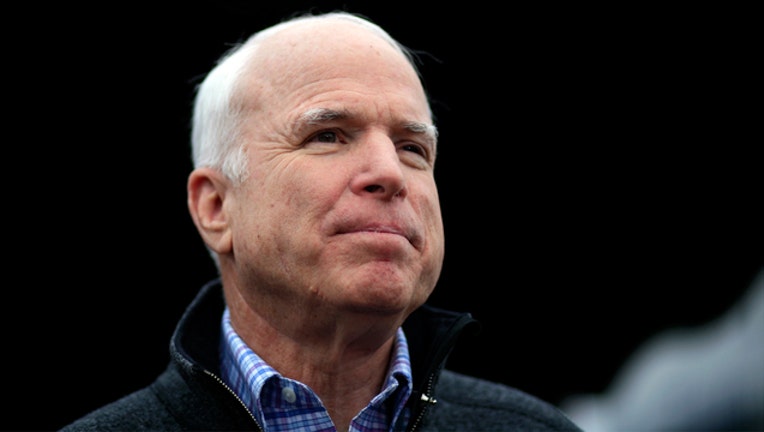 WASHINGTON - The body of John McCain, who suffered more than five years as a prisoner of war in Vietnam before going on to serve in the U.S. Senate for decades, will lie in state at the U.S. Capitol Rotunda on Friday.

A formal ceremony is set to take place in the Rotunda at approximately 11 a.m. and the public is invited to pay their respects at the conclusion of the ceremony. He will lie in state for the remainder of the day.

The six-term Senator and two-time Republican candidate for president died on Saturday at his ranch near Sedona, Arizona after a yearlong battle with an aggressive form brain cancer. He was 81.

Items Not Allowed Inside of U.S. Capitol Building:

McCain, a decorated Vietnam War veteran, was honored in Arizona on Wednesday, the day he would’ve turned 82.

On Saturday, a funeral service will be held at the Washington National Cathedral where former presidents Barack Obama and George W. Bush will speak.

Obama, who triumphed over McCain in the 2008 Presidential Election, said that despite their differences, McCain and he shared a "fidelity to something higher - the ideals for which generations of Americans and immigrants alike have fought, marched, and sacrificed."

Obama said they "saw our political battles, even, as a privilege, something noble, an opportunity to serve as stewards of those high ideals at home, and to advance them around the world."

Bush, who defeated McCain for the 2000 Republican presidential nomination, called McCain a "man of deep conviction and a patriot of the highest order" and a "friend whom I'll deeply miss."

On Sunday, a private memorial service is planned at the U.S. Naval Academy Chapel in Annapolis, Maryland. McCain will be laid to rest next to his Naval Academy classmate and lifelong friend, Admiral Chuck Larson, who passed away in 2014.

His memorial website said that before his passing, Larson reserved four plots of land – for him, McCain and their spouses – near where they first met, at the U.S. Naval Academy’s cemetery at Hospital Point, overlooking the Severn River.

McCain was the son and grandson of admirals and followed them to the Naval Academy. A pilot, he was shot down over Vietnam and held as a prisoner of war for more than five years. He went on to win a seat in the House and in 1986, the Senate, where he served for the rest of his life.

McCain’s family asked before his death that President Donald Trump, who the senator had long feuded with, not attend his funeral services. Vice President Mike Pence was expected to attend, according to officials.

The Associated Press Contributed to this report.