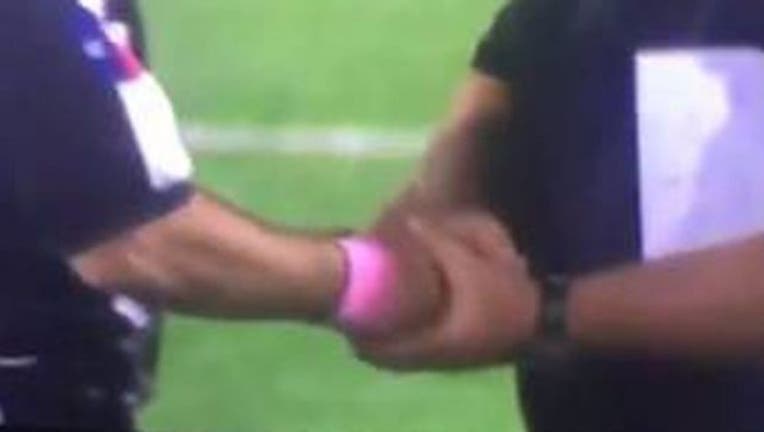 A mysterious post-game handshake between a high school football coach and a referee was no bribe, officials insist, despite a Texas-sized Internet buzz that the greeting - caught on cellphone video, looked mighty suspicious.

Calhoun coach Richard Whitaker said he passed a lucky poker chip on to the referee in the lingering glad-hand, and denied claims he was paying the the official, following a 43-20 victory over B. F. Terry High School on Oct. 15. The handshake became the talk of Whitaker’s Sandcrabs players, his school and the Internet when a 10-second clip was posted on Twitter earlier this week. It has since been deleted.

“It’s amazing how things travel from social media,” Whitaker told The Dallas Morning News in an interview Tuesday. “That’s why we tell our guys you can’t put things out there you don’t know the truth about.”

The day after the interview, the Calhoun School District in Port Lavaca issued a statement refuting claims on the web that Whitaker slipped cash into the referee’s hands. Whitaker confirmed he gave the ref a poker chip that had been handed to him by the Terry coach Tim Teykl, according to the statement.