A small business owner says he was banned from selling a "Free Kyle" shirt on the e-commerce platform Shopify referring to Kyle Rittenhouse, an Illinois teen accused of killing two people during unrest in Kenosha, Wisconsin.

The company told Seth Weathers, founder and owner of BringAmmo.com, that the product violated its Acceptable Use Policy, Weathers said. Weathers is now accusing Shopify of anti-conservative bias, telling FOX Business that the decision had little explanation and came "out of the blue," since the item had been listed since summer 2020.

"To me, it's a scary precedent and just shows where everything's going with Big Tech," Weathers told FOX Business. "With a company pushing conservative products ... and can be anti-establishment at times ... it's already a bit of a rough road."

The $24.95 T-shirt has an image of Rittenhouse holding a firearm with the slogan "Free Kyle." BringAmmo advertised that it would send $5 from the sale of each shirt to a defense fund for Rittenhouse, and Weathers said his business donated at least $1,000 to the fund.

"We have recently been made aware that certain products on your shop, bring-ammo.myshopify.com, are in violation of Shopify's Acceptable Use Policy (AUP). The below products have been removed and cannot be reposted," Shopify told Weathers in an email on Jan. 14. 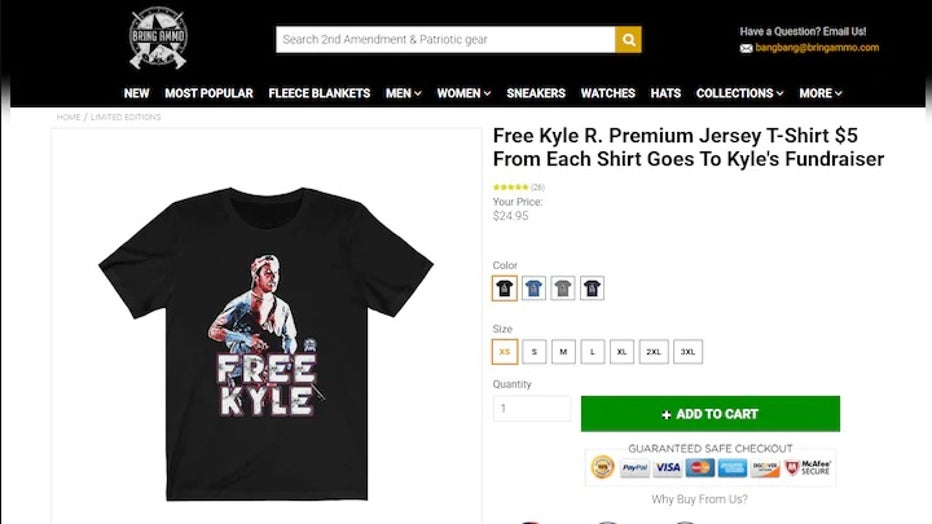 A conservative small business owner is accusing Shopify of conservative bias after the e-commerce platform blocked a "Free Kyle" shirt in his shop. (Screenshot)

The company's Acceptable Use Policy is wide-ranging and prohibits goods and services that promote hate or violence, illegal activities, self-harm and terrorist organizations.

"They're the largest e-commerce platform in the world now, and I do believe they're the best," Weathers said. "They have integration with other partners we need. ... We can't go anywhere."

Shopify has not removed other items on BringAmmo's site that show individuals holding firearms, including a T-shirt with St. Louis couple Mark and Patricia McCloskey emblazoned on the front.

"We're assuming they’re making the point we can’t sell anything related to raising money for [Rittenhouse]," Weathers said. "Again, they did this without discussion and there is nothing in the Terms of Service that would be a violation unless they are making assumptions about Rittenhouse's guilt."

Prosecutors say Rittenhouse, who was 17 at the time, opened fire during the protest, killing Joseph Rosenbaum and Anthony Huber and wounding Gaige Grosskreutz. Rittenhouse faces multiple charges, including intentional homicide. He has argued he was protecting businesses and fired in self-defense. Supporters have rallied around him, generating enough money to make his $2 million cash bail.

"Your site contains inappropriate language or promotes violence or intolerance," Apple Business Chat, a service that allows customers to chat with the company online, told BringAmmo in 2020.

Weathers provided the communications from Shopify and Apple Business Chat to FOX Business.

Shopify has faced criticism over conservatives using its platform before. Shopify closed websites associated with President Trump following the riots at the U.S. Capitol, years after resisting pressure in 2017 to deplatform conservative Breitbart's merchandise shop.

"They're based in Canada. I don't know why American politics and the Second Amendment should be a concern of theirs," Weathers said. "It's scary when you've got kids. … You realize how quickly the plug can get pulled because somebody disagrees with you."