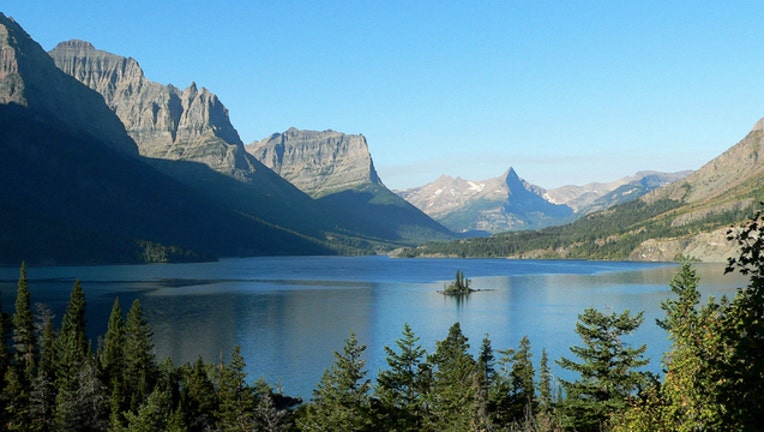 EAST GLACIER, Mont. (AP) - Chicago skyscrapers faded into green Wisconsin, and as the sun set over the Mississippi River, we made our first vacation decision. We weren't driving, so yes, we'd have some wine. We then sat back and watched as 1,500 miles went by aboard the Empire Builder train bound for Glacier National Park.

The historic train, which debuted with the Great Northern Railway in 1929, carries travelers between Chicago and the Pacific Northwest, with stops along the edge of the national park in western Montana. The park is home to seemingly endless snow-capped mountain peaks, cascading waterfalls, wildflowers and valleys of turquoise lakes.

Between the train and shuttle buses around the park, we left the driving to someone else.

Part adventure, part budget prompted the decision to take the train, which was about half the cost of flying when my hiking companion and I stumbled across the option for our 10-day trip last summer. Another plus: Our mammoth backpacks with protruding hiking poles fit, with creative maneuvering, into the train's overhead compartments.

We boarded the double-decker Amtrak train in Chicago's bustling Union Station. Our coach seats had larger-than-expected seats with ample legroom, leg rests and power outlets for our iPad during a movie or two on the nearly 30-hour trip. The seats reclined, but not fully, which made sleeping manageable but not especially comfortable overnight through Minnesota and North Dakota.

Sunrise over the plains was the cue to head to the viewing and dining cars, where floor-to-ceiling windows offered panoramic views of ranchland, towns and distant oil rigs. Locals advised where to sit for best views of the Rocky Mountains emerging from the prairie. A National Park Service ranger offered brief histories of early Montana settlers and the Blackfeet Nation as the train passed through the Native American tribe's reservation, which borders Glacier National Park.

At the East Glacier Park station, we stepped off into crisp air and quiet.

The park operates free, easy-to-use shuttle buses to explore the many trailheads, campsites and stunning views along Going-to-the-Sun Road, the only roadway bisecting the park.

But getting to other areas of the park without a car was tricky. Private, fee-based shuttles operated by Glacier Park Inc. and Xanterra Parks & Resorts access areas including Many Glacier, East Glacier and Two Medicine. Unfortunately, we'd tracked down incomplete information, including an inaccurate departure time that, had we waited for the next shuttle, would have cost us half a day.

We ended up hitchhiking with two friendly Malaysian visitors who crunched us into their small car in East Glacier after spotting our cardboard plea: "Many Glacier."

Campgrounds can quickly fill up. The one in Many Glacier was full before 7 a.m. the day we nabbed a site in mid-August.

Backcountry camping permits weren't easy to get either. Half the sites can be reserved in advance starting mid-March. The rest are distributed up to 24 hours in advance at ranger stations, first come, first served. We failed on two mornings - in line before sunrise - to reserve backcountry sites for popular multiday routes.

We did however snag the last hiker-only site at a small campground along Lake McDonald - one of the park's postcard gems, especially from a kayak - and called that home base for the last three nights.

SCENERY, WILDLIFE AND THE VANISHING GLACIERS

The 11-mile, out-and-back trail Grinnell Glacier pulls hikers above lakes surrounded by pink, yellow, purple and white wildflowers. A nearby trailhead accesses the roughly 11-mile route to and from Ptarmigan Tunnel, where rocky switchbacks climb to a dark tunnel, cut though the peak, that opens to maroon-tinted cliffs dropping into a deep valley. Another highlight was the cliff-side views across vast layers of peaks while hiking roughly 12 miles along the Highline Trail to Granite Park Chalet and descending to a shuttle stop along Going-to-the-Sun Road.

Hiking down from Grinnell Glacier was delayed thanks to a bighorn sheep blocking the trail. We also saw cliff-perched mountain goats and through binoculars, bears. Several backpackers we met reported close bear sightings, including grizzlies.

Only 25 active glaciers remain in the park, out of an estimated 150 that existed in the area in 1850. The National Park Service says those could be gone by 2030. So whether you go by car, train or tour, don't wait too long to see them.

TRAIN: Amtrak's Empire Builder, http://www.amtrak.com/empire-builder-train , travels from Chicago to Spokane, Washington, before continuing to Seattle or Portland, Oregon. Stops in between include Milwaukee and St. Paul, Minnesota.

TIPS: Read up if you're new to camping in bear country and take wildlife warnings seriously. Plan for weather extremes; temperatures swung from the 90s to the 40s with pelting rain in August. Don't rely on mobile devices in the park. Even at some lodges, Wi-Fi is spotty at best.