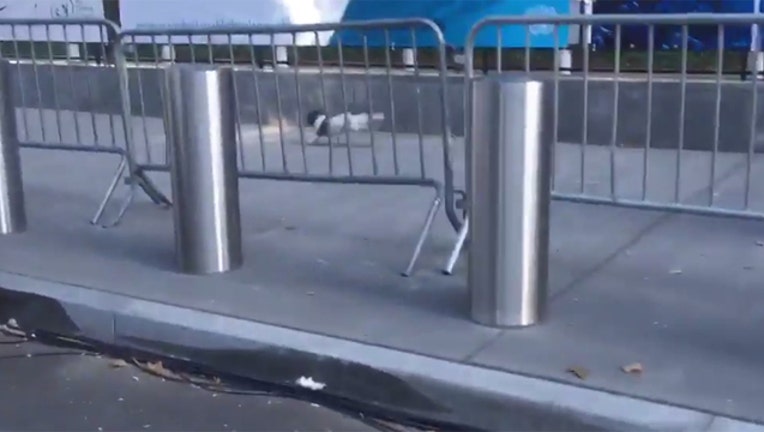 NEW YORK - Security by the NYPD, Secret Service, United Nations, and other law enforcement authorities for the pope's visit were no match for one little pooch determined to get a good spot on the East Side. Video shows a small black-and-white dog sprinting down the sidewalk behind police barriers outside the U.N. Pope Francis will address the U.N. General Assembly on Friday. (Scroll down for video and more details.)

The dog appeared to run past officer at the security perimeter on 46th Street and 1st Avenue. The four-legged fur ball then zipped toward the front entrance on the United Nations in a section normally reserved for diplomats. Instead of rushing up the steps into the building where the pope will speak Friday, the dog made a left and ran uptown near the media staging area.

Security officers in this area, possibly because they didn't see the speedy animal, also could not get the pup to stop. It appeared the dog ran back out of the secure zone.

A short time later, a woman, likely the owner, asked officers if they'd seen what happened. They pointed in the direction of the fugitive fur ball.

At this point it is unclear if dog and owner have been reunited.

Pope Francis' visit to the United States has brought out almost unprecedented levels of security, resulting in a kind of Fortress America.