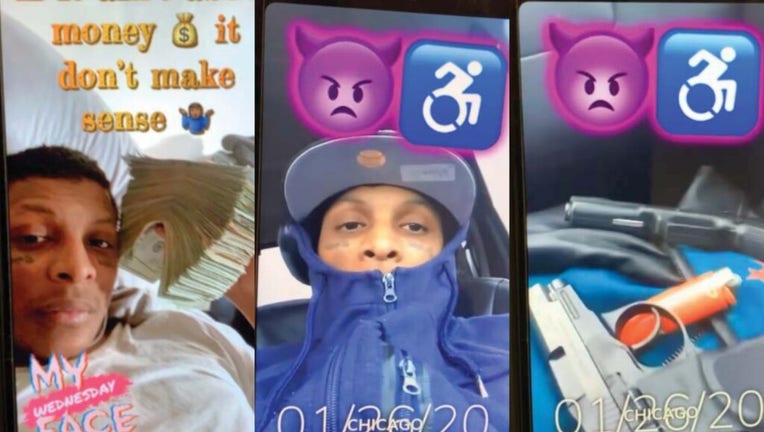 Federal prosecutors took a screenshots of Leonard Johnson’s Snapchat account that allegedly shows him with cash and pistols in his lap. | U.S. Attorney’s Office

When the agents arrived, they found Johnson, 32, lying on a bed and asked him if there was anything in the home that could hurt them, the complaint states.

Johnson, who goes by “Scrap,” allegedly said there were three or four guns in the home, along with “crack” and “dope” in his bedroom, the complaint states.

The agents found five pistols converted into machine guns: a Draco 7.62 x 39 millimeter pistol, a Glock 10mm pistol, a Glock 21 .45 caliber pistol, a Ruger EC9S 9mm pistol and what appeared to be a converted, homemade PFP400 Polymer 80 Glock-style pistol, according to the complaint.

While in custody, Johnson admitted to possessing the switches, or “attachments,” and to knowing that they make pistols fully-automatic, the complaint states.

“I’m not stupid,” Johnson allegedly told an agent during an interview.

“Yes, I’ve got some attachments up there. It’s what this’s called — attachments,” Johnson said, according to the complaint.

Johnson also admitted to running a business of selling the switches since June, selling each switch for about $500 each, the complaint states.

Johnson appeared in federal court in Chicago Tuesday on a count of illegal possession of a machine gun, according to the U.S. Attorney’s office for the Northern District of Illinois. He was ordered to remain held in custody.

“Machine guns pose a dangerous threat to public safety and have no place in Chicago-area streets,” U.S. Attorney John Lausch said in the statement. “Federal law enforcement will act swiftly to neutralize the threat posed by illegal machine guns and keep our community safe.”

Johnson is expected to appear in court again Friday.