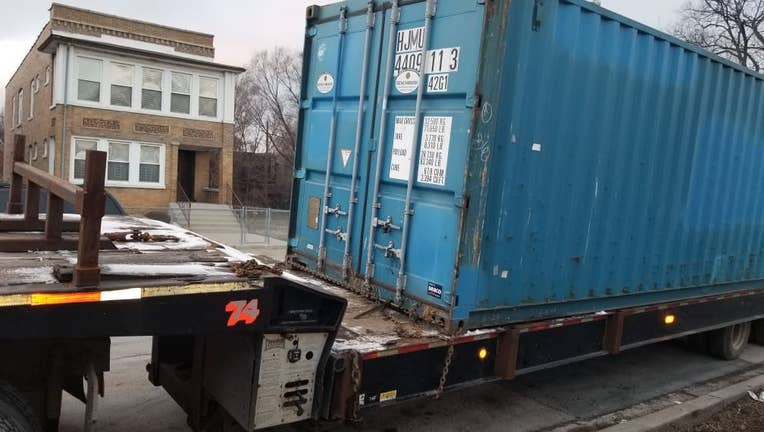 A Mothers Against Senseless Killings shipping container filled with decorations and toys for the group’s holiday party was towed Dec. 17, 2019, from a lot near 75th Street and Stewart Avenue. | Facebook via Tamar Manasseh

CHICAGO - A storage container full of supplies for a South Side anti-violence organization’s Christmas party that was towed away from Gresham and impounded Tuesday has been returned, although the group’s founder worries its contents have been irreparably damaged.

The container was towed about 4:30 p.m. Tuesday from the lot at 75th Street and Stewart Avenue, according to Mothers Against Senseless Killings founder Tamar Manasseh.

The group’s logo and website address were painted on the side of the blue steel shipping container, which had a 10-foot Christmas tree inside, along with lights, ornaments and other decorations for the group’s holiday party and toy giveaway, which was planned for Dec. 24, according to Facebook posts from MASK.

“Those containers don’t just belong to MASK or to me, they belong to the entire community,” Manasseh said. “Everybody in the neighborhood benefits from what happens with those containers.”

Manasseh said officials at the city pound at 103rd Street and Doty Avenue told her it was towed because Streets and Sanitation officials determined it was abandoned.

She said the container has been stored in the lot at 75th and Stewart for about two years, and that neither she nor MASK had ever received any kind of citation, warning or notice that it was at risk of being towed. Manasseh said MASK has an agreement with the Cook County Land Bank to use the lot for its events.

In an email Wednesday evening, Streets and Sanitation spokeswoman Marjani Williams said the department “has returned the storage container belonging to Mothers Against Senseless Killings.” She said a pre-tow notice was attached to the container Dec. 9, about a week before it was towed.

Manasseh confirmed the storage container was brought back to the lot about 4:30 p.m. Wednesday but denied that any advance notice was given.

She said she got in touch with 6th Ward Ald. Roderick Sawyer’s office to help get the container returned, and that she would have contacted him ahead of time to try to prevent the tow in the first place if she’d known it was coming. She also said she would have removed MASK’s property if she knew the container would be towed.

A representative for Sawyer’s 6th Ward office did not immediately respond to a request for comment Wednesday afternoon.

“What am I supposed to do with that?” she said. “I mean, I’m happy you brought it back, but you brought back a container. The container is unscathed, what about the stuff on the inside? It’s destroyed.”

Manasseh said she wasn’t able to assess the extent of the damage Wednesday evening, as the container doesn’t have lights and the locks were either frozen shut or damaged.

She said the MASK holiday party will be canceled, although the group still plans on giving as many toys to children as they can. Toys that were donated from the South Side were inside the container, but others donated at a separate drive at Upton’s Breakroom, 2054 W. Grand Ave., are safe.

Manasseh said people can still drop off toys for donation from 10 a.m. to 1 p.m. until Christmas at 6031 S. Halsted St.