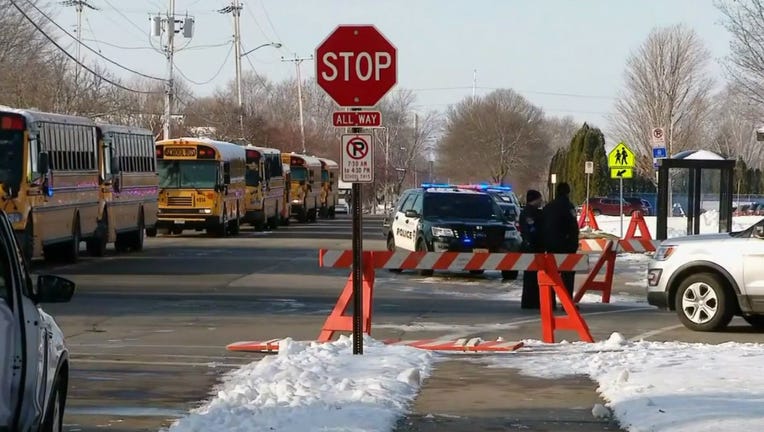 OSHKOSH, Wis. - An armed student confronted a school resource officer at a Wisconsin high school Tuesday morning and both were wounded, police said, in the second such shooting at a school in the state in as many days.

The latest shooting happened at Oshkosh West High School just after 9 a.m., Oshkosh police spokeswoman Katherine Mann said at a news briefing. The student and the officer were taken to hospitals, but no one else was injured in the shooting, Mann said.

Authorities have not released any information about the nature of the injuries to the student and the officer.

Police will not be releasing details of the type of weapon the student was carrying, and the Wisconsin Department of Justice Division of Criminal Investigation is handling the investigation, she said.

The school was locked down. Police said parents would be able to reunite with their children later at Perry Tipler Middle school. By late morning, parents were gathered at the middle school, waiting for their children.

An Oshkosh West student identified only as Evelyn told WLUK-TV that she was in class when she heard screaming and her teacher walked out.

“And then, like, after two minutes she ran back into the classroom and she was like, ‘Everybody needs to evacuate right now!’ And then we all ran out of the class and then we saw everybody from out school running to across the street.”

After reuniting with her mother at the nearby middle school, Evelyn said: “They told us they were going to tell us what was happening, but they never did.”

A senior identified only as Josh told the Journal Sentinel that he heard gunshots.

“I was walking in the hall, and a teacher shoved me into a classroom, and we started barricading the doors, and we all huddled in the corner, and there were gunshots,” he said.

The Rev. John Seelman, pastor of Immanuel Lutheran Church across the street from the school, says he saw one person being transported from the school in a wheelchair who was taken away in an ambulance, and another who was carried out on a stretcher.

Stephanie Carlin, who is the mother of a sophomore and a senior at Oshkosh West and a school board member, told The Associated Press that one of her sons texted her to say, “it was crazy,” but that both of her sons were safe.

Carlin referred questions to school board president Barbara Herzog, who did not immediately respond to a call and email seeking comment.

Just before 11 a.m., school buses were lined up outside the school and streets were blocked off. Several squad cars, many of them with lights still flashing, were parked outside, with officers manning the barricades blocking the street.

Tuesday’s shooting in Oshkosh, a city of about 67,000 people, was about 80 miles (130 kilometers) north of Monday’s shooting in the Milwaukee suburb of Waukesha. A police officer responding to a situation at Waukesha South High School shot an armed male student in a classroom. Officials say that student pointed a handgun at officers. The 17-year-old boy was wounded and is in custody in stable condition. No officers or other students were injured, Waukesha Police Chief Russell Jack said.

Wisconsin Attorney General Josh Kaul, a Democrat, said the two shootings reinforced the need to identify troubled students and get them the mental health services they need to prevent violence before it occurs. Kaul also renewed his call for the Republican-controlled Legislature to pass a universal gun background check bill and a “red flag” law that would empower judges to take guns from people determined to be a risk to themselves or others.

The state Justice Department’s office of school safety was working with both schools in Oshkosh and Waukesha to provide them with any services they may need, Kaul said. He also said if other schools with safety upgrade needs to contact his agency.

“These are really tragic incidents but it’s also true we have seen incidents where there has been mass tragedy,” Kaul said. “I feel really sorry for our kids that they have to go to school in this environment.”