Along with testing outside some hospitals, a northwest suburban Walmart is now becoming a designated testing site.

Along with testing outside some hospitals, a northwest suburban Walmart is now becoming a designated testing site. However, word is this specific site may solely be for healthcare workers and other first responders, and not for the general public.

It’s out in the open, but a lot of what is housed at the testing site on North Avenue is in two big cargo containers. The public is being kept out by a makeshift barricade.

Half of the Walmart parking lot has turned into a mobile drive-thru testing site for the coronavirus pandemic and just like the virus, there’s a lot of unknowns swirling around the Northlake location.

"We don’t know what the process will be,” said Northlake Police Department Chief Norman Nissen Jr.

Representatives from FEMA were on the ground off of North Avenue. The tents are up and everything is set to perform tests, but local agencies like Northlake and Elmhurst police are waiting for the greenlight from the feds. 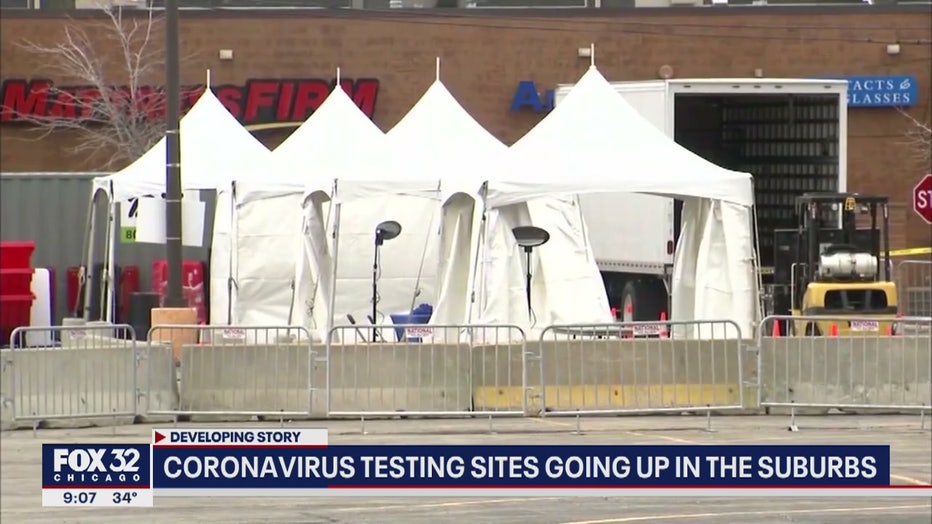 The testing in Northlake is a national initiative between Walmart, the Centers for Disease Control and Prevention, and Homeland Security.

Our camera captured the setup of another drive-thru testing location in the south suburbs off of 143rd and LaGrange Road in Orland Park. It’s not up and running yet, but when it is operational, people will be seen by appointment only and it’s solely for the University of Chicago Medicine’s patients and their healthcare workers.

The Chicago-area hospital system Advocate Aurora Health announced Friday that it has suspended its drive-up coronavirus testing sites because of a national shortage of test kits and processing materials.