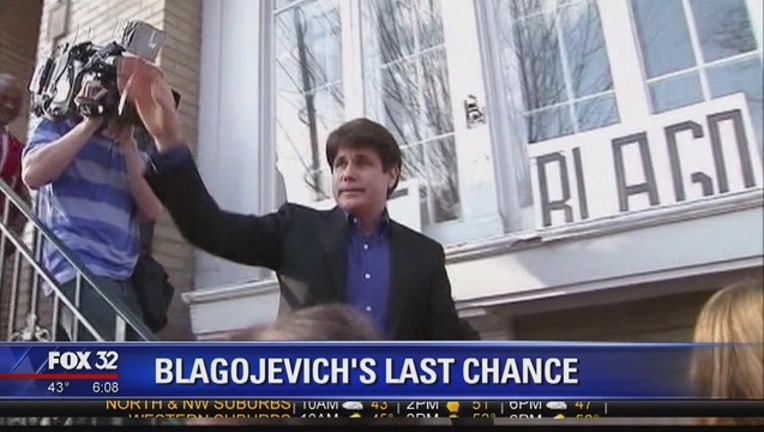 CHICAGO (AP) - The U.S. Supreme Court on Monday dashed one of Rod Blagojevich's last hopes to reduce his 14-year prison sentence by refusing to hear the former Illinois governor's appeal of his remaining corruption convictions, including his attempt to sell an appointment to the vacant Senate seat once occupied by President Barack Obama.

In so doing, the justices let stand a July ruling by the 7th U.S. Circuit Court of Appeals in Chicago that the Chicago Democrat crossed the line when he sought money - usually campaign cash - in exchange for naming someone to fill Obama's seat. The justices did not explain their decision.

The lower court had handed Blagojevich a largely symbolic victory by tossing five of his 18 convictions and said he should be resentenced on the 13 remaining counts. No resentencing date has been set, but it's likely to happen this year. In its ruling last year, the 7th Circuit said that even with the dropped counts factored in, Blagojevich's 14-year sentence may still be fair.

The former governor's wife, Patti Blagojevich, said in a written statement Monday that she and the couple's two children were "incredibly disappointed."

"This was, of course, not the outcome that Rod, our daughters Amy and Annie, had hoped and prayed for," she said. "But we continue to have faith in the system and an unshakable love for Rod. We long for the day that he will be back home with us."

Blagojevich attorney Leonard Goodman said in a phone interview that there's an outside chance the high court might consider a new request to hear the 59-year-old Blagojevich's appeal after resentencing. He said that's because one argument prosecutors made against the appeal being heard was that resentencing and other legal steps need to play out before the court should entertain the possibility of taking on the case.

"So we could consider going back to the Supreme Court again," Goodman said.

The U.S. attorney's office in Chicago declined any comment.

Blagojevich, who is in his fourth year at a federal prison in Colorado, loudly proclaimed his innocence after his 2008 arrest, including on TV talk shows and as a contestant on "Celebrity Apprentice" when it still starred now-presidential candidate Donald Trump. Blagojevich argued before, during and after his two trials that he had merely been participating in legal, run-of-the-mill politicking.

The request for the Supreme Court to consider Blagojevich's appeal was a long shot. The high court hears only around 80 cases a year out of more than 10,000 requests and typically accepts cases that raise weighty and divisive legal issues.

In their 83-page petition asking the Supreme Court to hear the appeal, defense attorneys argued that the line between the legal and illegal trading of political favors was blurred, potentially making elected officials everywhere subject to prosecution for cutting political deals.

In its July ruling, the 7th Circuit said Blagojevich broke the law when he sought money for naming someone to Obama's old seat. But it tossed counts linked to him asking for a Cabinet seat for himself. It said secretly trading favors based on politicians' executive powers was a legitimate way to get things done for constituents.

The three-judge appellate panel added that evidence on the 13 remaining counts, which included Blagojevich trying to squeeze a children's hospital for a campaign contribution, was "overwhelming."