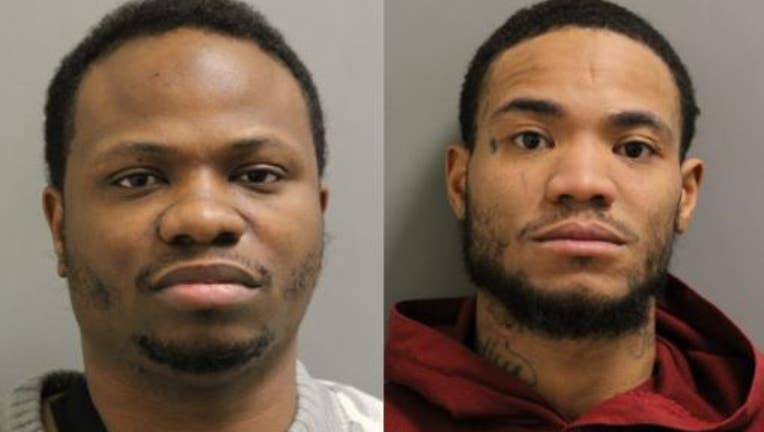 ORLAND PARK, Ill. - Two suspects have been charged with robbing a victim at gunpoint in a parking lot at Orland Square Mall Thursday afternoon.

At about 12:45 p.m., Orland Park police officers responded to an armed robbery in the parking lot of the mall.

Officers met with the victim, who stated that as he walked through the parking lot, he saw a white vehicle moving toward him.

The vehicle then stopped next to the victim, and the passenger of the vehicle exited and grabbed the victim while displaying a handgun, police said.

When the victim saw the gun, he attempted to flee the scene, but the passenger struck the victim with the handgun.

When the passenger of the vehicle hit the victim, the gun broke apart, police said.

The victim ran away, and the passenger grabbed the bag the victim was carrying and fled in the vehicle.

During the investigation, officers identified the white vehicle in question, which was registered to Joseph H. McCoy, from Justice, Illinois.

Officers located the vehicle parked and unoccupied at an apartment building in the 8400 block of 88th Avenue in Justice.

As officers exited their vehicles and identified themselves, Hill and McCoy fled on foot, police said.

Officers pursued the suspects, and they were taken into custody less than two hours after the crime's occurrence.

A handgun was located during the apprehension, which was allegedly a match to the missing part recovered at the scene of the armed robbery, police said.

McCoy was arrested for unlawful use of weapons in January of 2021 and was currently out of bond for that offense.

Hill is currently on parole, and had an active felony warrant issued in November of 2021 for aggravated fleeing and eluding.

Hill, 30, and McCoy, 28 are both charged with armed robbery for this crime.

Both are expected to be in court Saturday.