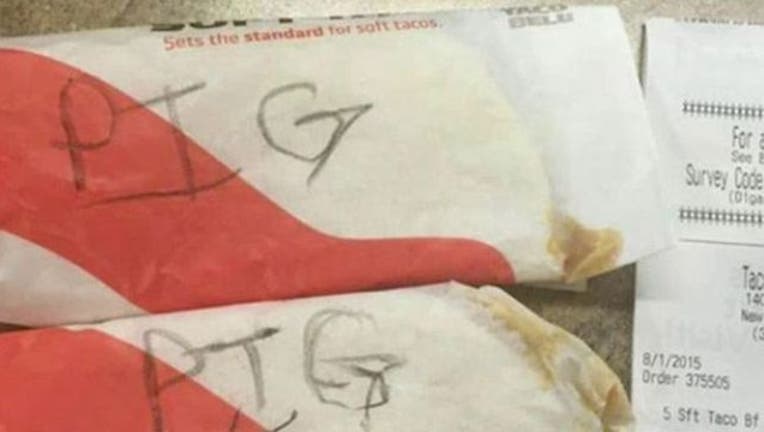 FOX News -- A Kansas Taco Bell employee has been fired for writing "PIG" on the wrapper of a police officer’s order.

On Aug. 1, an unnamed police officer and his fiancé ordered tacos at the fast food's Newton drive-through. But when they received the orders, they saw the derogatory term scrawled on the wrappers of the orders.

They immediately contacted management to complain about the order.

"I was told I could bring the five tacos back and she would have them remade," the couple told KAKE. "I advised her that we were both working and that wasn't an option. She then said she would leave a note to refund our money and get the food remade."

The officer’s fiance posted a picture of the marked orders on Facebook, declaring “THIS IS UNACCEPTABLE!! You know how angry this makes me.”

The image went viral over the weekend, and many in the community rallied behind the officer.

“It’s very disappointing and it’s very sad that an individual would do something like this,” Newton Police Chief Eric Murphy told KAKE.

Taco Bell's senior director of operations Jeff Graves confirmed that the employee responsible for offensive act has been fired and the restaurant group is working to rectify the situation.

“We do not share the same belief or view as the employee whatsoever. Our company, Taco Bell, has always been pro-law enforcement, military. We’ve always supported the police in our community. Many of our restaurants give police discounts when they come in and eat,” Graves said.

On Sunday, the Newton Police Department addressed the issue in a Facebook post and reiterated that the local Taco Bell store manager was “terribly apologetic of the actions of her employee and assures us the situation is being handled appropriately.”

The post continued “We understand the incident was the action of an individual, and do not hold ill will to Taco Bell or any of its employees (even the individual who wrote the message).”