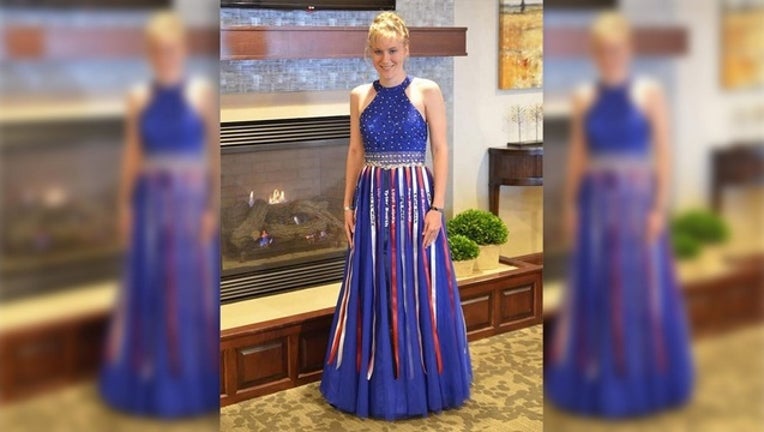 FOX NEWS - A high school student is honoring 25 fallen Marines with her prom dress – which reportedly took her two years to make.

Aubrey Headon, who attends Rochelle Township High School in Rochelle, Ill., designed the patriotic dress to resemble an American flag, with streamers of red and white that flow down the blue skirt. The matching blue halter top features embellishments that look like stars.

READ MORE ON THIS STORY ON FOXNEWS.COM

However, it’s not the striking color scheme that has sparked attention — it’s the detail. On the red and white ribbons are 25 names printed in white and black belonging to the members of the 3rd Battalion, 5th Marines, also known as 3/5 or Darkhorse, that were killed in action between September 2010 and April 2011 while conducting operations in the Sangin District of Helmand Province in Afghanistan.

Hearing about the battalion inspired Headon to pay tribute to the men’s sacrifice.

“I wanted to wear this tribute dress [to] my senior prom so the memories of the guys who fell in Afghanistan for our right to live how we do and do what we do every day is carried on,” the teen said to Yahoo Lifestyle. “I don’t want them to fade into nothing.”

Headon told Yahoo Lifestyle, the idea sparks after she met Gretchen Catherwood, a mom of one of the fallen men.

“She started the Darkhorse Lodge to help combat veterans. I do a fundraiser every year to donate to the lodge,” Headon said.

Since posting her dress on social media, Headon said she’s received tons of messages of support.