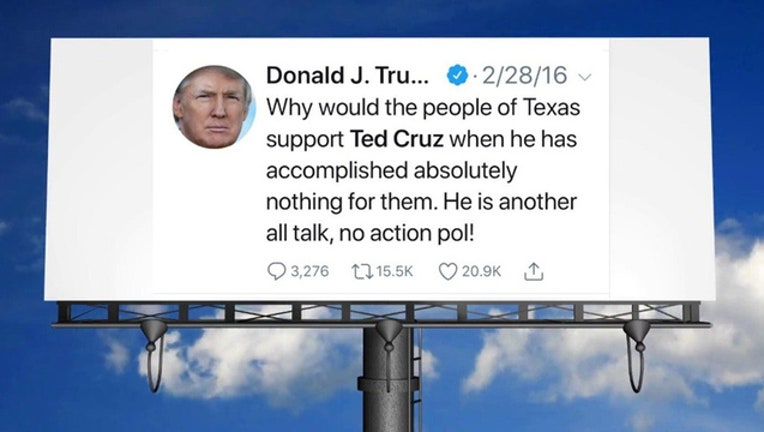 A Texas political activist and a Parkland, Fla. school shooting survivor have helped raise thousands of dollars to have a mobile billboard featuring Donald Trump’s anti-Ted Cruz tweets appear at a massive fall rally in the state.

Antonio Arellano and survivor David Hogg along with the chairman of a liberal political action committee were behind the effort, which blew past its GoFundMe fundraising goal in less than 24 hours over the weekend.

“President Donald Trump will be campaigning to help Sen. Ted Cruz win his re-election,” read the fundraising description. “A rally is being planned, according to Trump ‘at the biggest stadium in Texas.’ We are planning to display the presidents own words about Cruz from 2016 on a mobile billboard, to remind Texans of the truth.”

"So many wonderful selections to choose from…Thank you @POTUS,” Hogg tweeted. Hogg has become a prominent gun control advocate in the wake of the deadly school shooting.

One of the tweets that will appear on the board was from Feb. 2016, when Cruz and Trump were in the midst of a heated presidential primary.

“Why would the people of Texas support Ted Cruz when he has accomplished absolutely nothing for them,” Trump's tweet reads. “He is another all talk, no action pol!”

The feud between the two continued to escalate as the primary season continued, with Trump amplifying a conspiracy theory that Cruz’s father was involved in the assassination of President John F. Kennedy in 1963. At the Republican convention later that summer, Cruz famously declined to endorse Trump during his speech before delegates.

On Friday, Trump announced he would headline a rally for Cruz in October at a large stadium somewhere in Texas. Cruz had previously stated he would welcome the president’s help in what has become an unexpectedly tight re-election contest for the U.S. Senate.