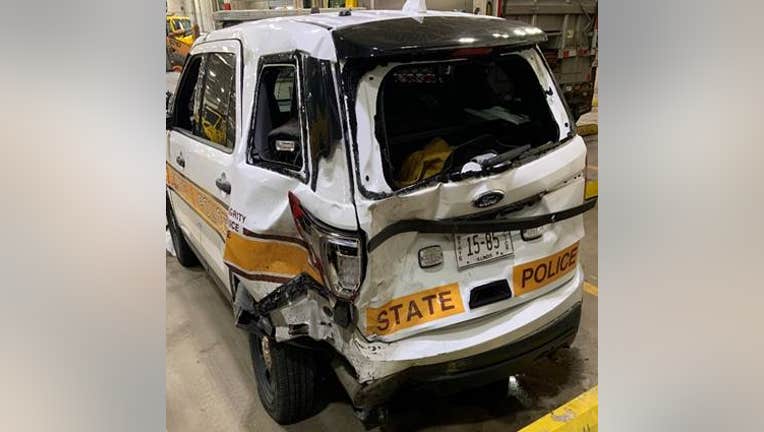 LEMONT, Ill. - An Illinois State Police trooper was struck while conducting a traffic stop on Interstate 355 in Lemont Thursday.

At about 2:20 p.m., an Illinois State Police District 15 Trooper was stationary on I-355 northbound near the Boughton Road Exit.

The trooper had the emergency lights activated on the vehicle for a traffic stop.

A Toyota Tacoma, which was traveling northbound on I-355, failed to yield to the emergency vehicle and struck the rear driver side of the squad car, ISP said.

The driver of the Toyota was identified as Evan K. Johnson, 24, of Tinley Park.

The trooper and the driver were transported to an area hospital with non-life-threatening injuries.

"ISP Troopers work hard to protect the motoring public on Illinois roadways.  We need the public to avoid putting their lives and the lives of others at risk by making responsible choices when behind the wheel.  Always pay attention and move over when you approach a stationary vehicle on the side of the road," stated District 15 Commander, Captain Jason Bradley.

The crash remains under investigation, and charges are pending, ISP said.

There have been 15 ISP squad cars struck this year in relation to the Move Over Law.