The 60-meter toddler race was held by USA Track & Field in light of the Tokyo Olympics.

TOKYO - Five years after their quest for a first Olympic gold medal was denied in the semifinals, the United States women's volleyball team has returned to that stage after a relatively easy quarterfinal win.

The short-handed Americans overcame the absence of two starters to beat the Dominican Republic 25-11, 25-20, 25-19 on Wednesday and advance to the semifinals.

The U.S. will play Serbia on Friday for a spot in the gold medal game in a rematch of a semifinal the Americans lost five years ago in Rio de Janeiro.

This marks the sixth time in the past eight Olympics that the U.S. has made it this far in the tournament but the country is still seeking their first gold in the sport. The U.S. won a medal at the past three Olympics, getting silver in 2008 and ’12 and bronze in 2016.

"This program has had great success over the years," U.S. coach Karch Kiraly said. "But we haven’t stood at the top of the podium yet. So our goal, our objective is always to try to do something that’s never been done before. But the opponent has a lot of say over how that works out. ... There are great teams here who have the same objective. But we’re going to keep hurling ourselves at that door and try to break it down." 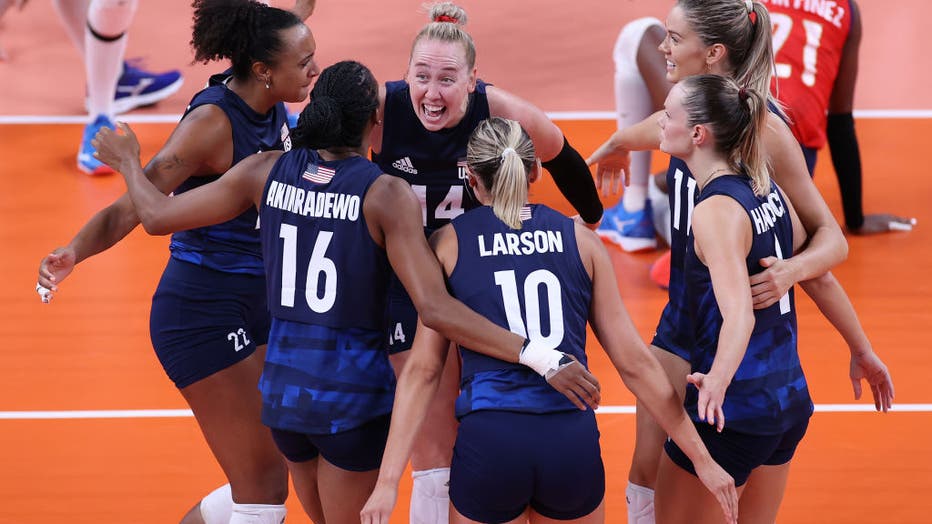 TOKYO, JAPAN - AUGUST 04: Team United States celebrates after the play against Team Dominican Republic during the Women's Quarterfinals volleyball on day twelve of the Tokyo 2020 Olympic Games at Ariake Arena on August 04, 2021 in Tokyo, Japan. (Phot

That five-set loss to Serbia in 2016 after star middle blocker Foluke Akinradewo Gunderson left following the first set with a knee injury has served as fuel ever since and Kiraly's crew is ready to try to avenge it.

The U.S. came into the quarterfinals short-handed with starters Jordyn Poulter and Jordan Thompson both sidelined by right ankle injuries. But both players have surprised Kiraly with how quickly they are recovering and could have played in an emergency.

"We knew that we had them available to play," Kiraly said. "But we also knew if we could play without them, it’s nice to give them a couple of extra days to be confident in their ankle, to jump more at the net tomorrow in training and things like that."

They weren't missed against the Dominicans with fill-ins Micha Hancock and Annie Drews setting the tone early. Hancock's set led to a spike by Drews on the first point of the match and Hancock ended a lopsided first set with an ace.

The second set was a bit tougher with the Dominican Republic fighting off four set points before Drews ended it again with an attack point. Drew finished with a game-high 21 points.

"I told them when Jordan Poulter got hurt that out of the match against Italy, the great teams adapt and compensate and adjust," Kiraly said. "We’ve been doing a really nice job of that."

After her Olympic win, a professional flipbook artist was inspired by her performance for his next creation.

Hancock and Drews are part of a group of several first-time Olympians such as Thompson, Poulter, outside hitter Michelle Bartsch-Hackley and libero Justine Wong-Orantes that have had stellar tournaments so far.

The mix of youth with experience in three-time Olympians such as Akinradewo Gunderson and captain Jordan Larson has been a good formula for the U.S.

"They’re playing like it’s any other tournament," Akinradewo Gunderson said about her inexperienced teammates. "They’re playing with a lot of confidence and fearlessness. That is truly inspiring for me to see them just get after it. It’s easy maybe in big moments to shrink. I think everyone is being even bigger in the moment."

The Dominicans made it to the quarterfinals in their third Olympic trip ever. They also lost to the U.S. in the quarters in London in 2012 and failed to make it out of pool play at the 2004 Athens Games.

Serbia swept Italy and is seeking to get back into the gold medal game after losing it to China five years ago following the big semifinal win over the U.S.

"We know each other very well so I hope we are going to have another good match," captain Maja Ognjenovic said.

Tijana Boskovic, the leading scorer in the tournament, ended Italy's run with a spike that gave her a game-high 24 points in the match.

South Korea outlasted Turkey in five sets earlier Wednesday to make it into the other semifinal against Brazil. The Brazilians beat the team representing the Russian Olympic Committee in four sets to get back to the semifinals after losing in the quarterfinals at home five years ago.

Brazil won gold in 2008 and '12 and had made six straight trips to the semis before losing to China in the quarterfinals in 2016.

The South Koreans are seeking their second medal ever in the sport, having won bronze at the 1976 Montreal Games. The only other times they made it to the semifinals came in 2012 and 1972.