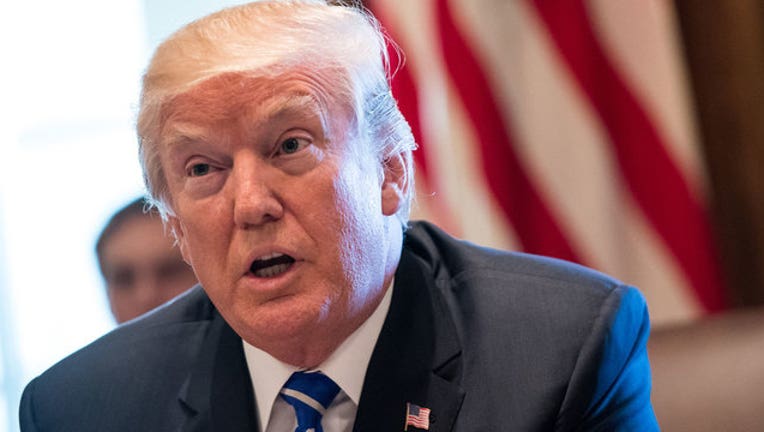 President Trump speaks to the media during a cabinet meeting at the White House on November 20, 2017 in Washington, D.C. President Trump officially designated North Korea as a state sponsor of terrorism. (Photo by Kevin Dietsch-Pool/Getty Images)

In a series of tweets fired off before dawn on the first day of his Thanksgiving vacation, the president complained yet again that LaVar Ball, father of LiAngelo Ball, hasn't given him credit for the release of his son and two other UCLA basketball players from detention in China.

Tweeting from his Florida vacation home Wednesday morning, Trump said: "It wasn't the White House, it wasn't the State Department, it wasn't father LaVar's so-called people on the ground in China that got his son out of a long term prison sentence - IT WAS ME."

"Too bad! LaVar is just a poor man's version of Don King, but without the hair," he said.

Trump also warned that Ball "could have spent the next 5 to 10 years during Thanksgiving with your son in China, but no NBA contract to support you" had it not been for his intervention.

"But remember LaVar, shoplifting is NOT a little thing. It's a really big deal, especially in China," he wrote.

LiAngelo Ball and two UCLA teammates were released after a brief detention in China while Trump was visiting the country. Trump has taken credit for the release, saying that he discussed the situation with Chinese President Xi Jinping during their talks.

Trump had previously said he should have left all three players in jail.

LaVar Ball has repeatedly minimized Trump's involvement in winning the players' release, telling CNN earlier this week: "If I feel nobody did anything, I don't have to go around saying thank you to everybody."

Trump is also speaking out against the idea of keeping NFL players in the locker room during the playing of the national anthem as a response to players who refuse to stand during the Star-Spangled Banner to protest racial inequality and police brutality.

"That's almost as bad as kneeling! When will the highly paid Commissioner finally get tough and smart?" Trump wrote. "This issue is killing your league!"