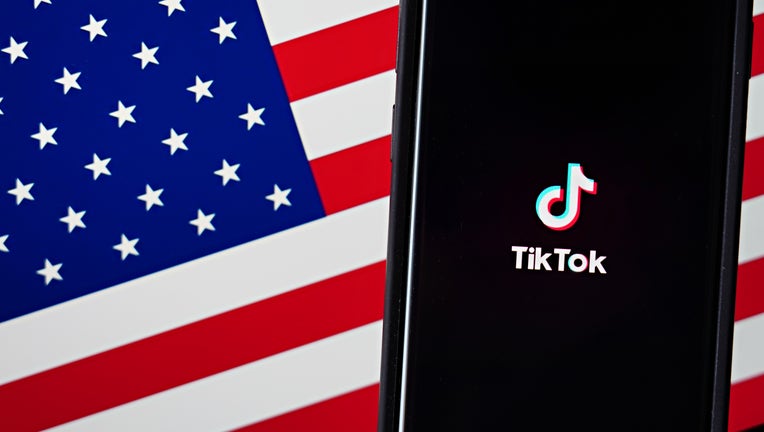 In this photo illustration, a mobile phone featuring the TikTok app is displayed next to the American flag on August 03, 2020 in New York City. (Photo Illustration by Cindy Ord/Getty Images)

The order prohibits “any transaction by a US person or within the US that evades or avoids, has the purpose of evading or avoiding, causes a violation of, or attempts to violate the prohibition set forth in this order.”

“The following actions shall be prohibited beginning 45 days after the date of this order,” according to Trump.

President Donald Trump has ordered an unspecified ban on transactions with the Chinese owners of the consumer apps TikTok and WeChat.

"As I explained in an Executive Order of August 6, 2020 (Addressing the Threat Posed by Tiktok, and Taking Additional Steps to Address the National Emergency With Respect to the Information and Communications Technology and Services Supply Chain), the spread in the United States of mobile applications developed and owned by companies in the People's Republic of China (China) continues to threaten the national security, foreign policy, and economy of the United States," the order reads.

TikTok was specifically targeted in the executive action. The order alleges that the app “automatically captures vast swaths of information from its users.”

Trump’s order goes on to say that TikTok “threatens to allow the Chinese Communist Party access to Americas’ personal and proprietary information.”

TikTok was under review by the Committee on Foreign Investment in the United States, known as CFIUS, a U.S. government group chaired by the Treasury Secretary that studies mergers for national-security reasons, for its acquisition of another video app, Musical.ly, in 2017. The president can approve or disapprove a transaction recommended by the interagency panel. CFIUS collects filing fees, but those top out at $300,000.

Microsoft had also been in talks to buy parts of TikTok, a forced sale after Trump threatened to ban the Chinese-owned video app, which claims 100 million U.S. users and hundreds of millions globally. The Trump administration says TikTok is a national-security concern. How a ban would have worked was not clear; that federal authority has never been used before with a consumer app. TikTok denies that it would send U.S. user data to the Chinese government.

Microsoft did not initially address a potential price when it confirmed the talks.

TikTok has said that it is loved by Americans and “will be here for many years to come.” In a memo ByteDance CEO Zhang Yiming sent Chinese employees Tuesday, a translated version of which ByteDance sent to The Associated Press, he said that he felt the goal of the Trump administration was not the forced sale of TikTok’s U.S. business to an American company through CFIUS, but “a ban or even more.”