President Biden on Tuesday delivered his strongest defense yet of the legitimacy of his own election last year.

ALABAMA - In what seemed like a preview of a potential stump speech should former President Trump eventually follow through on his flirtations to launch a 2024 White House bid, Trump once again took aim at his successor on Saturday night.

"One year ago this month in my nomination speech," Trump told the large crowd of supporters at a large rally in Cullman, Alabama, harkening back to his 2020 Republican National Convention address, "I warned the entire country of the disastrous consequences of a Biden presidency."

Trump then blasted President Biden, criticizing him over crime, inflation, and the haphazard evacuation of U.S. personnel and allies from Afghanistan after repressive Taliban forces rolled into Kabul, the central Asian country’s capital and largest city.

"This is a great stain on the reputation of our country," the former president charged.

Trump, who struck a deal with the Taliban in February of last year that called for all U.S. troops to depart Afghanistan by May 2021 and who during his watch reduced U.S. forces to their lowest level in Afghanistan in two decades, on Saturday called the Taliban "great negotiators, tough fighters."

Trump also criticized Biden for failing to "stop the virus," as he pointed to the surge in COVID cases due to the highly contagious delta variant.

"Could you imagine if I were president and the virus was surging back?" the former president said before slamming Biden for "reimposing mask mandates and threatening new restrictions."

The then-President’s handling of the coronavirus pandemic as it swept the nation last year was a key factor in Biden’s victory over Trump in last November’s election.

While the former president’s verbal attacks on his successor were well received by the crowd, as expected, Trump did encounter push back when he advocated for vaccines.

"I believe totally in your freedoms, I do, you gotta do what you gotta do, but I recommend take the vaccines. I did it. It's good," Trump said, eliciting brief boos from his supporters.

"That's okay, that's alright," the former president added. "But I happen to take the vaccine. If it doesn't work, you'll be the first to know. But it is working. You do have your freedoms, you have to maintain that." 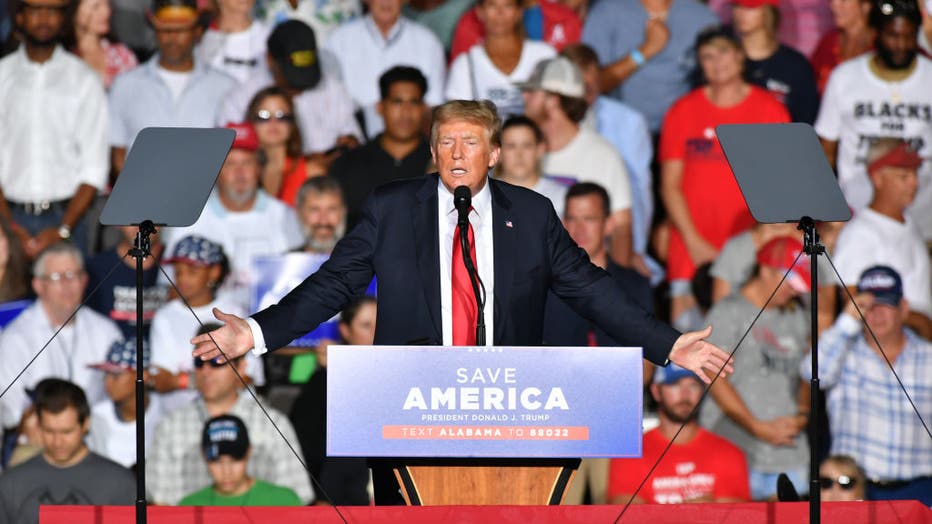 Vaccination rates in Alabama lag behind the national average, and the state is facing hospital and emergency room overcrowding as new COVID cases surge. A local state of emergency was declared in Cullman on Thursday, two days before Trump held his rally in the northern Alabama city.

Rep. Mo Brooks, a strong Trump ally who’s running in the 2022 race for Alabama’s open Senate seat, introduced the former president at the rally. But Brooks also experienced pushback from the crowd when he urged them to look ahead to the 2022 midterms rather than back to the 2020 elections.

"Alright, well look back at it, but go forward and take advantage of it," Brooks added as he responded to the crowd.

Since losing the 2020 election to Biden, Trump has made repeated unsubstantiated claims that the election was "rigged" and "stolen"

Brooks, who’s part of a crowded and competitive GOP primary in the race to succeed retiring Republican Sen. Richard Shelby, was endorsed by Trump in April.