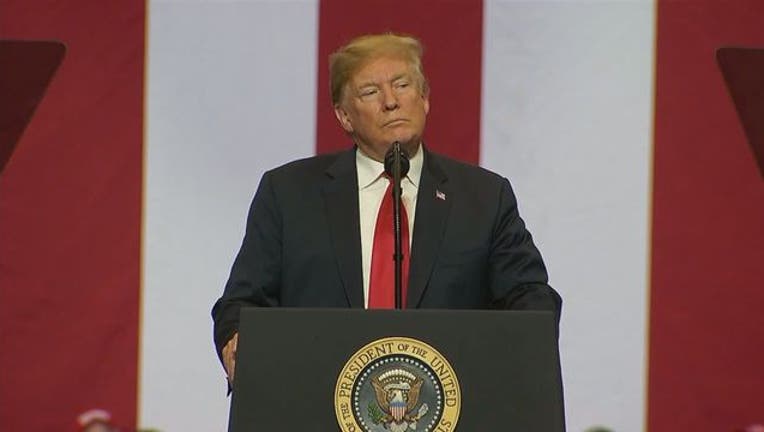 FARGO, N.D. (AP) — President Donald Trump urged voters on Wednesday to fire "liberal Democrat" Sen. Heidi Heitkamp in November, claiming that she promised to be an independent mind but instead has voted in lockstep with her party leadership and against his agenda.

Trump called instead for the election of Republican U.S. Rep. Kevin Cramer, one of his staunchest allies in Congress.

"When Heidi ran for office, she promised to be an independent vote for the people of North Dakota," Trump said to an arena packed with cheering supporters in Fargo. "Instead, she went to Washington and immediately joined Chuck ... and Nancy," a reference to Democratic congressional leaders Sen. Chuck Schumer and Rep. Nancy Pelosi.

But Heitkamp, one of the most vulnerable incumbents seeking re-election this year, is considered a moderate who is one of the least reliably partisan Democratic votes in the Senate. She's largely backed the oil-rich state's corporate interests on energy and has opposed some restrictions on guns. She voted to confirm 21 of Trump's 26 Cabinet-level nominations.

The president, however, noted Heitkamp's votes against tax cuts he signed into law in December as well as the GOP's long-sought goal to undo the health care program enacted by President Barack Obama.

Called to the microphone by the president, Cramer thanked Trump for rolling back federal regulations, cutting taxes and, "on behalf of the most vulnerable forgotten people, the unborn babies, thank you for standing for life."

He pledged to always be with Trump.

"And on these very important North Dakota values, you never have to wonder where I'll be because I'll always be with them and with you 100 percent of the time," Cramer said.

Heitkamp stood next to Trump at the White House when he signed a banking deregulation bill into law, alarming some Republicans who worried he was becoming too close to her. Trump also invited her to join him on stage with Cramer during a past appearance in North Dakota. At that event, Trump called her a "good woman" and said he hoped for her support. Heitkamp has described having a "friendly" relationship with Trump.

Trump urged the election of more Republican senators, saying the current 51-49 GOP majority is a "problem." Most legislation needs 60 votes to get through the Senate, and Democrats have refused to go along with much of what Trump and the Republicans have proposed.

"It's a very tough situation," he said. Trump added that "we have to hold the House and maybe even increase it, and I think we'll be able to do it."

To that end, he pointed to primary election results Tuesday night that saw the surprise upset of House Democratic Caucus Chairman Joe Crowley of New York to Alexandria Ocasio-Cortez, a 28-year-old Latina who worked for Bernie Sanders' presidential campaign.

Trump mocked Democrats' talk of a "blue wave" in November that help their party take back the House, saying they "keep talking about this blue wave," but "their blue wave is really sputtering pretty badly."

He referred to Crowley, a Trump critic, as a "slovenly man" who "got his ass kicked by a young woman who had a lot of energy."

Trump also touched on Wednesday's announcement by Supreme Court Justice Anthony Kennedy that he is retiring at the end of July after 31 years on the bench, giving the president a second opportunity to put a justice on the high court and cement the conservative wing.

Trump said he has to name someone young enough "that's going to be there for 45 years. We need intellect ... so many elements go into the making of a great justice of the Supreme Court."

He claimed that Heitkamp will vote against whoever he nominates to succeed Kennedy, despite her vote to approve Neil Gorsuch, Trump's first nominee to the Supreme Court. But, referring to the rally, said, "Maybe because of this she will be forced to vote 'yes.'"

Although Cramer was among the earliest to back Trump's presidential campaign, he has questioned the support he's received from the president.

He recently called White House chief of staff John Kelly to make clear he was less than thrilled with Trump's friendly treatment of Heitkamp, who joined Democrats in voting against tax cuts Trump enacted last year and has voted against some of his Cabinet nominees.

Cramer has said the hubbub was "more about the White House than me," but some Republicans think it's time for Trump to take on Heitkamp.