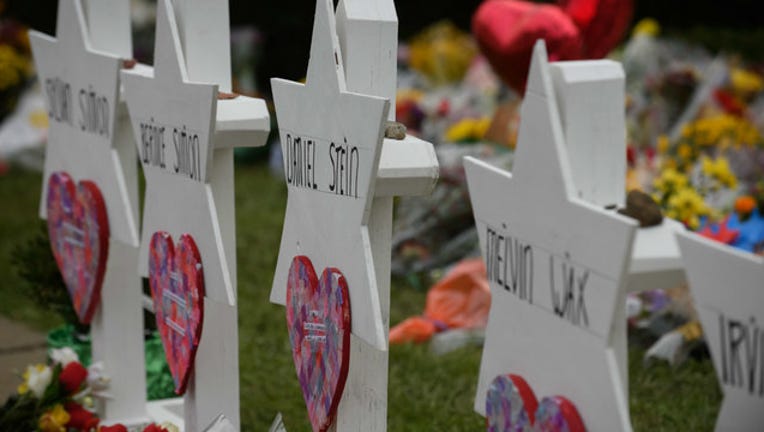 A memorial for victims of the mass shooting that killed 11 people and wounded 6 at the Tree Of Life Synagogue on October 29, 2018 in Pittsburgh, Pennsylvania. (Jeff Swensen/Getty Images)

PITTSBURGH (AP) - To Marianne Novy, President Donald Trump isn't wanted "unless he really changes his ways." For David Dvir, politics should take a pause for grief: "It's our president, and we need to welcome him."

Trump is once again called upon to step into the all-too-frequent role of national consoler after the worst instance of anti-Semitic violence in American history. He faces an uneasy welcome on Tuesday in the anguished community of Squirrel Hill, home to the Tree of Life synagogue where 11 people were gunned down during Sabbath services. The president's visit to the Pittsburgh neighborhood, where Novy and Dvir live, comes as he struggles to balance appeals for national unity with partisan campaign rhetoric just a week before contentious midterm elections.

Trump said late Monday he was looking forward to the visit.

"Well, I'm just going to pay my respects," Trump told Fox News Channel's Laura Ingraham. "I'm also going to the hospital to see the officers and some of the people that were so badly hurt."

Trump is traveling to the historic hub of the city's Jewish community as the first funerals are scheduled to be held for the victims, who range in age from 54 to 97. He is expected to meet with first responders and community leaders. The death toll includes a set of brothers, a husband and wife, professors, dentists and a physician. It was not immediately clear whether Trump, who will be joined by first lady Melania Trump, daughter Ivanka Trump and son-in-law Jared Kushner, would meet with any family members.

The White House said the purpose of Trump's visit was to "express the support of the American people and to grieve with the Pittsburgh community."

Trump's trip is set against the backdrop of national unease over incidents of political violence and hate, and questions about his credibility as unifier. Since his 2016 campaign for the White House, Trump has at times been slow to denounce white nationalists, neo-Nazis and other hate-filled individuals and groups that found common cause with his nationalistic political rhetoric.

In Squirrel Hill, Barry Werber, 76, who said he survived the massacre by hiding in a dark storage closet as the gunman rampaged through the building, said he hoped Trump wouldn't visit, noting that the president has embraced the politically fraught label of "nationalist." Werber said the Nazis were nationalists.

"It's part of his program to instigate his base," Werber said, and "bigots are coming out of the woodwork."

Novy, 73, a retired college English professor, said she signed an open letter asking Trump not to come to Pittsburgh. "His language has encouraged hatred and fear of immigrants, which is part of the reason why these people were killed," she said.

Just minutes before the synagogue attack, the shooter apparently took to social media to rage against HIAS, a Jewish organization that resettles refugees under contract with the U.S. government.

Dvir, 52, the owner of Murray Avenue Locksmith in Squirrel Hill, said of Trump, "I think he made some mistakes, but he is a great president." He added that it would be "a shame" if the community protested the president's visit.

Asked Monday if Trump has done enough to condemn white nationalism, White House press secretary Sarah Huckabee Sanders said the president "has denounced racism, hatred and bigotry in all forms on a number of occasions."

She added: "Some individuals - they're grieving, they're hurting. The president wants to be there to show the support of this administration for the Jewish community. The rabbi said that he is welcome as well."

Local and religious leaders were divided on whether Trump should visit. Pittsburgh Mayor Bill Peduto, a Democrat, told reporters ahead of the announced visit that the White House ought to consult with the families of the victims about their preferences and asked that the president not come during a funeral.

"If the president is looking to come to Pittsburgh, I would ask that he not do so while we are burying the dead," Peduto said. "Our attention and our focus is going to be on them, and we don't have public safety that we can take away from what is needed in order to do both."

But Rabbi Jeffrey Myers, who was conducting Sabbath services at the Tree of Life synagogue when the shooter opened fire, made clear the president would be welcome, telling CNN: "The president of the United States is always welcome. I am a citizen. He is my president. He is certainly welcome."

Shulamit Bastacky, 77, a Holocaust survivor and neighbor of victim Melvin Wax, expressed hope that fraught political issues and protests would not overshadow the remembrances.

"This is not the place to do it," she said. "You can do the political part everywhere else. Not at this time. This would be like desecrating those people who were killed. They were murdered because they were Jews."

"You can protest later on," she added. "To me it's sacred what happened here."