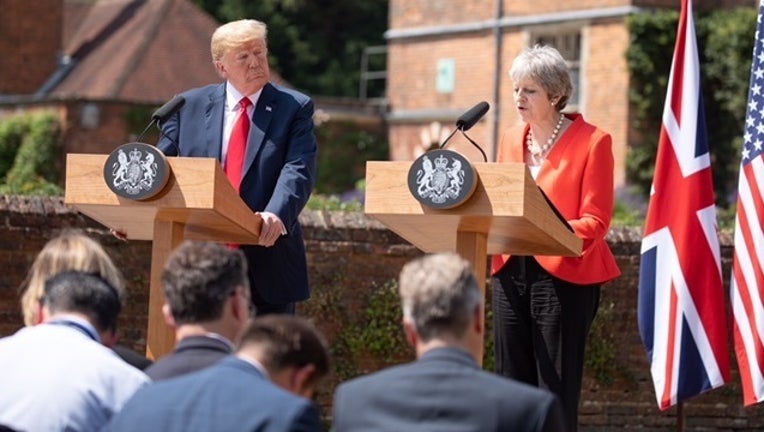 President Trump's lament that immigration is "changing the culture" of Europe echoed rising anti-immigrant feelings on both sides of the Atlantic. (Photo by Shealah Craighead)

WASHINGTON (AP) -- President Donald Trump's lament this week that immigration is "changing the culture" of Europe echoed rising anti-immigrant feelings on both sides of the Atlantic, where Europe and the United States are going through a demographic transformation that makes some of the white majority uncomfortable.

"The way he put this argument about changing our culture ... about Europe becoming less nice than it is, in other words, these people are here and they are making the culture crappy and making the place lesser, that's straight out of the white supremacist/white nationalist playbook," said Heidi Beirich, director of the Southern Poverty Law Center's Intelligence Project.

Trump, in an interview with the British newspaper The Sun, blamed immigration for a changing culture in Europe: "I think allowing millions and millions of people to come into Europe is very, very sad. I think you are losing your culture. Look around. You go through certain areas that didn't exist ten or 15 years ago."

Trump, the grandson of a German immigrant and the son of a Scottish immigrant to the United States, repeated his contention at a news conference with British Prime Minister Theresa May:

Claire M. Massey, a scholar at the Institute for British and North American Studies at Ernst-Moritz-Arndt Universitat in Greifswald, Germany, said Trump's comments were "awfully painful," especially for the United Kingdom, where immigration has played a key role in rebuilding the country after World War II. "England and the United Kingdom wouldn't be what it is today without immigrants," she said.

Massey said Trump's comments remind her of the rhetoric coming from neo-Nazis in Germany and Poland. The comments will embolden the far-right in Europe at a time when many European nations are already very diverse.

Lisbon, Portugal, for example, is now home to sizable and visible Brazilian, Cape Verdean, and Angolan populations. The immigrant groups and their Portuguese-born children have helped revitalize areas of the cities once in disrepair and have a presence in everything from professional soccer teams to popular culture.

Portuguese Mozambique-born fado singer Mariza is among the nation's most beloved performers.

In France, immigrants from the Middle East and Africa have settled throughout Paris and have drawn the ire of the far-right and even some moderates over the city's changing makeup. Then-French Prime Minister Francois Fillon decreed in 2011 that women were banned from wearing face veils outside of the home except in mosques or as car passengers. A European court later upheld the ban, saying the intent was to unify the country, but not before an outcry by human rights activists.

Throughout England, from London to Liverpool, immigrants from Asia, Africa, the Middle East and the former British colonies in the Caribbean have reshaped various neighborhoods, drawing scorn from members of the far-right and some rural residents who blamed the European Union and immigrants for the economic struggles of once-prosperous mining regions.

The United States is also going through a demographic shift. The Census Bureau estimates that the country's population will have more minorities than whites for the first time in 2043, a change due in part to higher birth rates among Hispanics and a stagnating or declining birth rate among blacks, whites and Asians.

Trump's public life has been filled with controversial statements about immigrants.

In the first moments of his presidential campaign in June 2015, he called for the construction of a border wall with Mexico and accused the country of sending migrants who were "bringing drugs. They're bringing crime. They're rapists. And some, I assume, are good people."

He continually used dark imagery to depict immigrants as dangerous invaders. Then, in the aftermath of a terrorist attack that December in San Bernardino, California, that was carried out by a U.S.-born Muslim and his Pakistani wife, who was a legal U.S. resident, Trump called for barring all Muslims from entering the country. The Supreme Court eventually upheld his executive order banning travel from several mostly Muslim countries, rejecting challenges that it discriminated against Muslims or exceeded his authority.

In January, Trump questioned why the U.S. would accept more immigrants from Haiti and "shithole countries" in Africa as he rejected a bipartisan immigration deal, according to one participant and people briefed on the conversation.

MORE: Trump asks why US should allow people in from 's***hole countries'

In recent weeks, Trump bowed to tremendous political pressure and issued an executive order ending his administration's practice of separating migrant children from their parents when families cross the border with Mexico illegally.

Paul A. Kramer, a Vanderbilt University historian who specializes in the politics of inequality in the United States, said Trump's most recent comments were an intentional attempt to ally himself and his base in the United States with the far-right nationalist movements in Europe.

"The rising tide of white nationalism is something that he embraces, that he sees himself as participating in and that he wants to encourage," Kramer said.