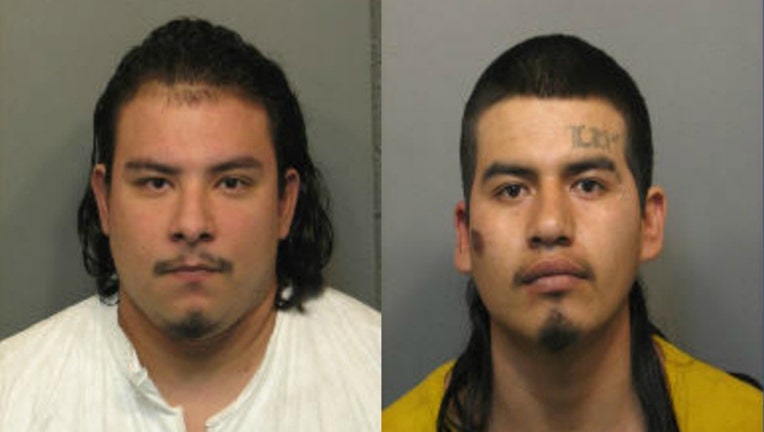 Jose Vidales, 21, of Round Lake, was charged with aggravated discharge of a firearm, aggravated unlawful use of weapon, felony armed violence and felony aggravated UUW by a gang member, according to Arlington Heights police. His bond was set at $1.5 million.

Leonardo Rosario, 21, of Palatine, was charged with one count of aggravated unlawful use of a weapon, two counts of resisting a peace officer and aggravated UUW by a gang member. All of the charges are felonies. Rosario’s bond was at $500,000, police said.

Both men remain in custody.

About 9:30 p.m. Friday, investigators heard a single gunshot in the first block of Algonquin Road, police said. They responded to a hotel parking lot and encountered three people. Two were quickly taken into custody but the third, Rosario, refused to comply and a struggle broke out. Police said Rosario is a known gang member.

When the struggle ended up on the ground, Rosario tried to reach the front of his waistband, police said. Officers eventually took him into custody and recovered a loaded handgun from his waistband.

Investigators watched surveillance video and saw that Vidales, another known gang member, was the one who fired the gunshot in the parking lot, then ran to a hotel.

Officers searched the building and found Vidales in a second-floor room with five other people, police said. Vidales was seen throwing two bags out of the room’s sliding glass doors, one of which contained a handgun.

Vidales and the other five suspects ignored attempts by officers to communicate at the door and on the phone, police said. A search warrant was obtained, and the Northern Illinois Police Alarm System was activated.

Eventually, all six, including Vidales, left the room and were taken into custody.

No one was injured, police said. Vidales and Rosario were charged, and the other suspects were released.