President Joe Biden on Aug. 16, 2021, called the Taliban capture of Afghanistan gut-wrenching but rejected blame for what's happening and stood behind his decision to pull U.S. troops out after a 20-year war.

WASHINGTON - A significant majority of Americans doubt that the war in Afghanistan was worthwhile, even as the United States is more divided over President Joe Biden's handling of foreign policy and national security, according to a poll from The Associated Press-NORC Center for Public Affairs Research.

Roughly two-thirds said they did not think America’s longest war was worth fighting, the poll shows. Meanwhile, 47% approve of Biden’s management of international affairs, while 52% approve of Biden on national security.

The poll was conducted Aug. 12-16 as the two-decade war in Afghanistan ended with the Taliban returning to power and capturing the capital of Kabul. Biden has faced bipartisan condemnation in Washington for sparking a humanitarian crisis by being ill-prepared for the speed of the Taliban's advance.

Satellite imagery from August 16 shows the chaotic scenes at Kabul Airport that morning as thousands of people flocked there in a bid to escape after the Afghan capital fell under Taliban control the previous day. (Credit: Maxar Technologies via Storyful)

The president has stood by his decision to exit the country, insisting that he will not allow the war to continue indefinitely and betting that Americans agree with him.

Mark Sohl is among those who do. The 62-year-old Democrat from Topeka, Kansas, said "it wasn’t worth losing more American lives over a mess."

Others felt more conflicted after seeing grim scenes in Afghanistan even if they opposed the war overall. In one image likely to endure, Afghans clung to U.S. military planes in a desperate bid to flee the country

"I don’t believe we should have been in there to begin with," said Sebastian Garcia, a 23-year-old Biden voter from Lubbock, Texas, who said he had three cousins serve in Afghanistan. "But now that we’re leaving, I do feel we probably should stay after seeing, I guess you’d say, the trouble we’ve caused."

Roughly two-thirds also suggest the Iraq War that coincided with Afghanistan was a mistake. Republicans are somewhat more likely than Democrats to say the wars in both countries were worth fighting. About 4 in 10 Republicans do, compared with about 3 in 10 Democrats. 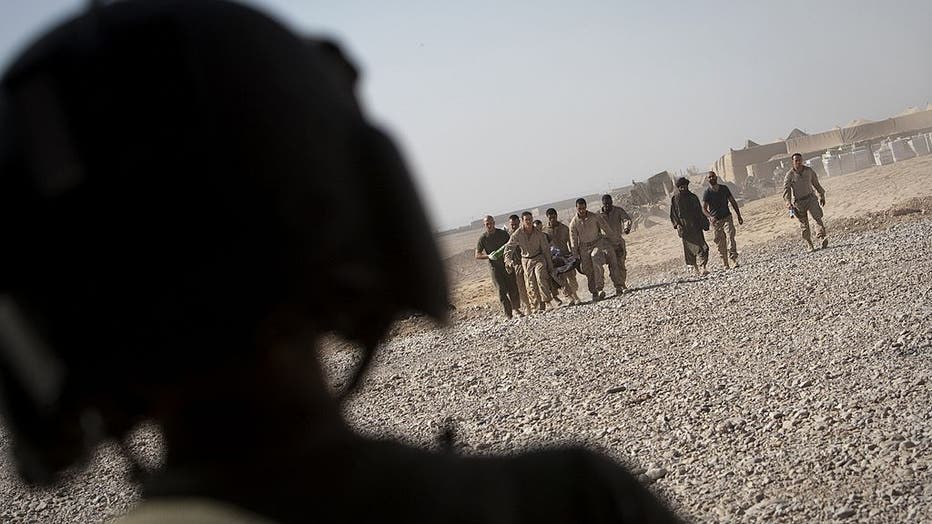 Deborah Fulkerson of Pueblo, Colorado, believes it would be wise for the U.S. to remain in Afghanistan.

"I feel like us having a presence there just keeps things more neutral and safer there for those people and for us," said the 62-year-old, who describes herself as "more conservative," particularly on social issues.

Fulkerson acknowledged that she does not follow Afghanistan that closely, saying she is more concerned with gas prices and local news.

"I’m a Christian and I know where my future lies, and all of this stuff that’s going on that I have no control over except through prayer, I just can’t watch it all the time," she said. "I would be negative all the time."

About half of Americans say they are extremely or very concerned about the threat to the U.S. posed by extremist groups based outside of the United States; about another one-third are moderately concerned. Only about 1 in 10 say they are not concerned.

But nearly 20 years after the Sept. 11 attacks that spurred the Afghanistan war, more Americans say they perceive the major national security threats as being internal.

Roughly two-thirds say they are extremely or very concerned about the threat of extremist groups based inside the United States. About one-quarter are somewhat concerned, and about 1 in 10 are not concerned.

Biden has largely focused his policy agenda on domestic issues such as rebuilding the U.S. economy after the coronavirus pandemic. That appears to be resonating with some Americans who see Afghanistan as a distant war but the costs of food, housing and transportation as inescapable.

Michael Lee Bettger, 47, said he voted for Donald Trump, but has been impressed by the economy under Biden and that is his priority. Bettger lives in Austin, Arkansas, and has never been this busy working industrial maintenance.

"Jobs are just overflowing," Bettger said. "There’s not enough of me to go around."

RELATED: How to help Afghan refugees: Ways to support those impacted by Taliban takeover

The AP-NORC poll of 1,729 adults was conducted Aug. 12-16 using a sample drawn from NORC’s probability-based AmeriSpeak Panel, which is designed to be representative of the U.S. population. The margin of sampling error for all respondents is plus or minus 3.2 percentage points.