University of Illinois Chicago students say they are unnerved after classmate Ruth George, 19, was found strangled inside a campus garage on Saturday.

CHICAGO - The young woman found dead at the University of Illinois-Chicago was strangled, and there is a person of interest in custody.

Ruth George, 19, was found dead in a car in a UIC parking garage on Sunday morning.

Police say that her family had reported her missing and that they had not heard from her since Friday evening. Police and relatives found the car in the garage, with George unresponsive in the back seat of a family-owned vehicle Saturday morning. 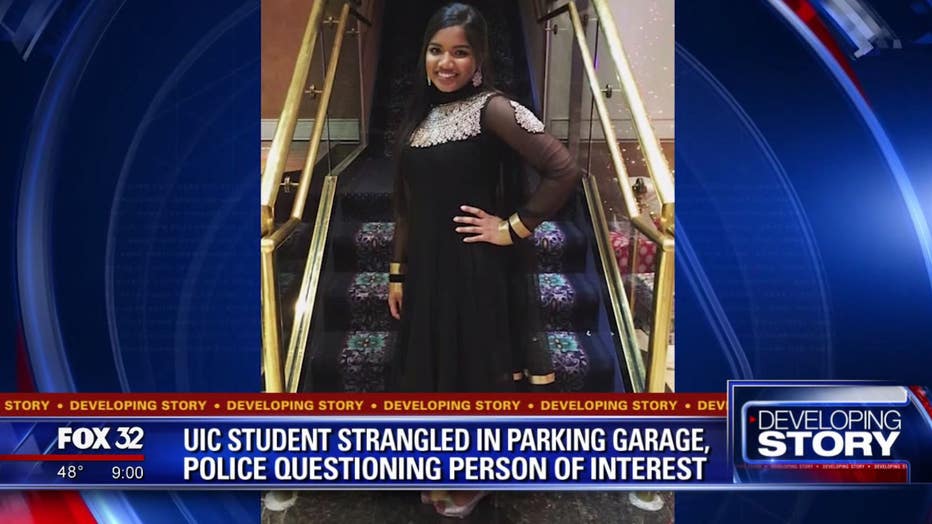 University of Illinois Chicago student Ruth George was found murdered in a campus garage on Saturday.

Police said she was along when she entered the Halsted Street parking garage on Nov. 23 at 1:35 a.m. A person of interest entered the garage shortly after her.

The murder has unneerved students.

“Everyone wants to do like the buddy system walking to cars , like even if you’re not parked here, maybe just walk together and drop off whoever walked you,” said Donna Ngyuen, UIC student.

“A lot of robbery and theft, I’ve seen that happening but never a murder,” said Vakrand Sharma, UIC student.

“It was just really shocking and I feel like I talked about it so many times today about how it’s so unfair that you can't feel safe on campus,” said Shade Idowe, UIC student.

“Everybody’s in shock, that can happen to anybody so prayers out to her and her family so,” said Cedric Rowzee, UIC student.

George was a graduate of Naperville Central High School and had recently become a Christian. She moved to Berwyn this summer.

"Ruth was such a sweet girl and had the biggest and brightest smile," said Naperville gymnastics coach Christina Tardy. "We loved having her as a member of the NCHS gymnastics team and she was so fun to watch compete, especially on the floor exercise. She was a great teammate and we are going to miss her dearly."