President Joe Biden urged Americans to get vaccinated as the COVID-19 delta variant continues to cause a surge in cases.

WASHINGTON - President Joe Biden on Tuesday called on resistant governors to "get out of the way" of vaccine rules aimed at containing the more transmissible and dangerous COVID-19 variant. He backed city and private mandates requiring people to be vaccinated to go about some daily activities.

Speaking from the White House, Biden sharply criticized Florida Gov. Ron DeSantis, Texas Gov. Greg Abbott and other officials who have moved to block the re-imposition of mask mandates to slow the delta strain of the virus. The strain is surging in their states and other parts of the country that have large numbers of unvaccinated people.

"If you’re not going to help, at least get out of the way of people trying to do the right thing," Biden said.

Biden also renewed his push for Americans to get vaccinated on Tuesday as COVID-19 cases trend upward, calling the pandemic "largely preventable."

"What’s different about this surge compared to previous ones is that we have the tools to prevent this rise in cases from shutting down our businesses, our schools and our society as we saw what happened last year, " Biden said from the White House Tuesday afternoon.

Biden noted while the U.S. is seeing a rise in COVID-19 positive cases, the country hasn’t seen a comparable rise in hospitalizations and deaths, giving credit to the current vaccines which health officials said can ward off serious illness and death from a COVID-19 infection.

"In fact, according to one recent study, 95% of all overall COVID-19 hospitalizations are among those not fully vaccinated," he added.

Biden pointed out that cases are particularly on the rise in the South, where vaccinations rates remain low but have recently increased.

He endorsed New York City's move to require vaccinations to dine indoors or go to the gym, as well as corporate moves to require vaccines to return to work, and said more localities and businesses should follow suit. Such policies have been barred to varying degrees in at least seven GOP-led states.

"This is a tragedy," he continued. "People will die who don’t have to die. The data is absolutely clear. We have a pandemic of the unvaccinated."

At the same time, the Biden administration is helping other countries increase their vaccination rates.

The United States has donated and shipped more than 110 million doses of COVID-19 vaccines to more than 60 countries worldwide, the White House announced on Tuesday.

The Biden administration said in a statement that the donations to countries ranging from Afghanistan to Zambia are "just the beginning." At the end of August, the U.S. will also begin shipping 500 million doses of Pfizer-BioNTech’s COVID-19 vaccine to 100 low-income countries in need, officials said.

"As one part of our strategy to do that, the President has promised that the United States will be an arsenal of vaccines for the world and is acting with the same urgency to combat the virus abroad as here at home," the White House said in the statement.

Biden had pledged to ship more than 80 million doses overseas by the end of June but had only been able to share a fraction of that due to logistical and regulatory hurdles in recipient countries. The pace of shipments picked up significantly through July. 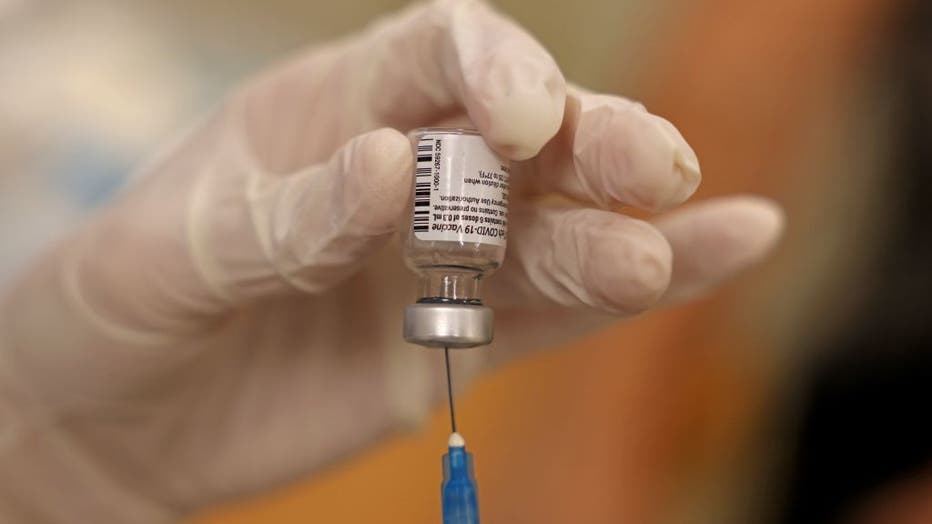 FILE - A health worker prepares a dose of the Pfizer-BioNTech COVID-19 vaccine at the Clalit Health Service in Jerusalem on August 1, 2021. (Photo by MENAHEM KAHANA/AFP via Getty Images)

Under Biden’s sharing plan, about 75% of U.S. doses are shared through COVAX, which aims to help lower- and middle-income nations, with the balance being sent to U.S. partners and allies.

The White House insists that nothing is being sought in return for the shots, contrasting its approach to Russia and China, which it alleges have used access to their domestically produced vaccines as a tool of geopolitical leverage.

The 110 million donated doses came from U.S. surplus vaccine stock as the pace of domestic vaccinations slowed amid widespread vaccine hesitancy in the country. On Monday, the U.S. reached 70% of American adults to have received at least one dose of a vaccine — a goal Biden had hoped to reach by July 4.

Data from the U.S. Centers for Disease Control and Prevention shows that among those who are currently eligible to receive a vaccine, 58.1% are now fully inoculated.

Roughly 90 million eligible Americans aged 12 and over have yet to receive one dose of vaccine.

The White House announcement comes amid an uptick in COVID-19 cases and hospitalizations in the U.S., fueled by the highly contagious delta strain of the virus. The delta variant led CDC officials last week to recommend that people who have been fully vaccinated against COVID-19 resume wearing face coverings in public indoor settings.