The U.S. military says it has conducted an airstrike against Taliban forces in southern Afghanistan, only days after American and Taliban officials signed an ambitious peace deal in the Mideastern state of Qatar.

KABUL, Afghanistan (AP) - The U.S. conducted Wednesday its first airstrike against Taliban forces in Afghanistan since signing an ambitious peace deal with the militant group.

U.S. military spokesman Col. Sonny Leggett said in a tweet that the “defensive” strike was the first U.S. attack against the militants in 11 days. He said the attack was to counter a Taliban assault on Afghan government forces in Nahr-e Saraj in the southern Helmand province.

Leggett added that Taliban forces had conducted 43 attacks on Afghan troops on Tuesday in Helmand. According to a spokesman for the province's governor, Omer Zwak, at least two police officers were killed and one other wounded in the Washir district of southern Helmand.

Leggett called on the Taliban to stop the attacks and uphold their commitments based on the peace agreement signed on Feb. 29 between their leaders and U.S. envoy Zalmay Khalilzad in Doha, Qatar, which lays out a conditions-based path to the withdrawal of American forces from Afghanistan.

President Donald Trump confirmed Tuesday that he spoke on the phone to a Taliban leader, making him the first U.S. president believed to have ever spoken directly with the militant group responsible for the deaths of thousands of U.S. troops in nearly 19 years of fighting in Afghanistan.

The Afghan Interior Ministry says that four civilians and 11 troops were killed Wednesday in a wave of Taliban attacks across the country in the past 24 hours. 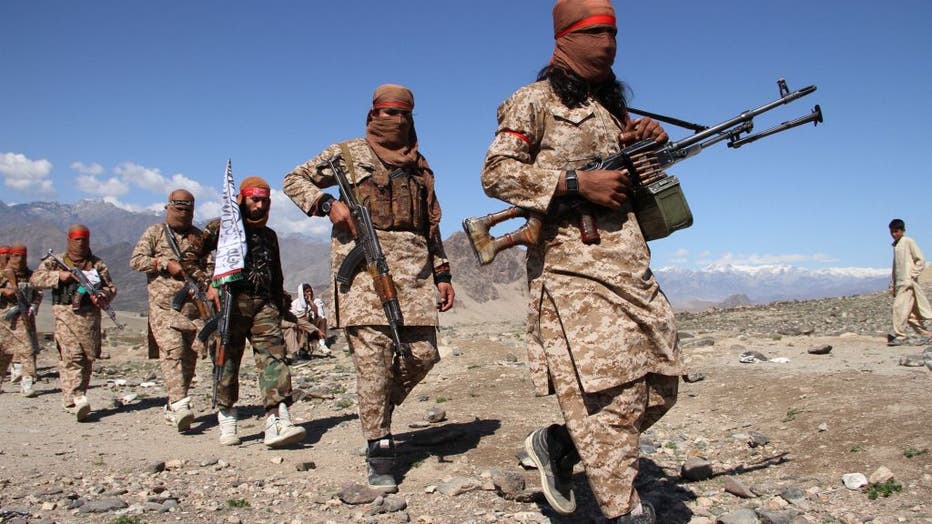 Afghan Taliban fighters and villagers attend a gathering as they celebrate the peace deal signed between US and Taliban in Laghman Province, Alingar district on March 2, 2020. (Photo by Wali Sabawoon/NurPhoto via Getty Images)

According to ministry spokesman Nasrat Rahimi, Afghan forces killed at least 17 Taliban during these clashes.

The Afghan Defense Ministry earlier said that seven soldiers were killed when Taliban attacked a checkpoint in northern Kunduz province.

Kandahar police spokesman Jamal Naser Barekzai told The Associated Press that a police officer was killed and one wounded in a string of Taliban attacks across the province.

The Taliban have not claimed responsibility for any of these attacks so far or commented on the U.S. airstrike Wednesday.

However, Taliban spokesman Zabihullah Mujahid told the AP Wednesday that a week of reduction in violence that started midnight on Feb. 21 had ended.

Based on the U.S.-Taliban deal, peace negotiations between the warring Afghan sides are supposed to begin on March 10. However, the Afghan government has already rejected releasing Taliban prisoners ahead of launching the talks, a precondition which the militants say was part of the U.S. agreement.

Leggett said that U.S. forces are responsible for defending their Afghan allies according to agreements between U.S. and Afghan governments.