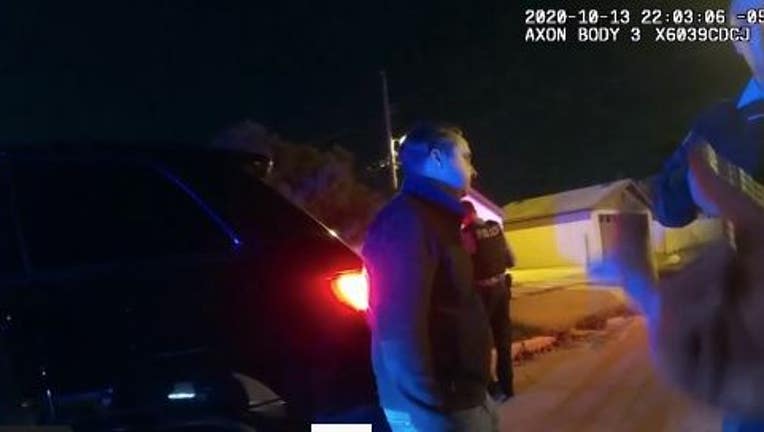 CHICAGO - The oversight agency of Chicago police Thursday released body camera videos related to an October officer-involved shooting on the Southwest Side.

Off-duty Chicago police officer Joseph Cabrera was allegedly drunk when he fired his service weapon at a man following a  fight Oct. 13 in the 5200 block of South Monitor Street, officials said. The man was not struck when Cabrera fired towards his legs.

Cabrera, an eight-year veteran of the Chicago Police Department, was arrested by the Bureau of Internal Affairs Wednesday morning, police said in an emailed statement. He faces charges of aggravated assault and making a false statement.

Judge Susana Ortiz denied a defense attorney’s request Wednesday to withhold the release of videos related to the incident, the Civilian Office of Police Accountability said in a statement.

VIDEO ADVISORY: Profane language is heard throughout the video.

Video was released related to an October officer-involved shooting.

One body-worn camera shows officers arriving at the scene of the attack, where Cabrera displays his service weapon and tells police a man started attacking him and he fired a round.

In another video, a man tells officers Cabrera was following him, then started getting aggressive and grabbed him by the neck. The man said that is when he punched Cabrera who in turn pulled out a gun and shot at him.

Earlier in the same video, officers are seen placing the man in handcuffs as he tries to explain he is the one who has been shot at.

COPA said it concluded the investigation into Cabrera’s use of force, but the agency said it continues to investigate the actions of responding officers in the aftermath of the shooting.

LINK TO ALL VIDEOS RELATED TO THIS INCIDENT