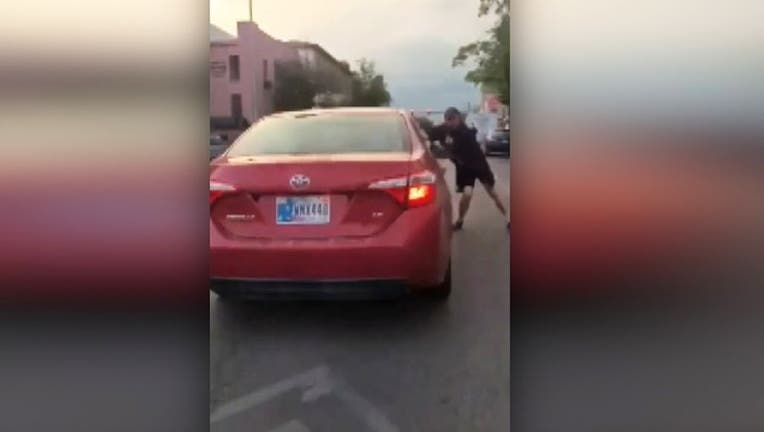 Disturbing videos have emerged purportedly showing a car driving into two protesters following a demonstration Monday night in Indiana, leaving them clinging onto its hood as it raced down a street.

The crowd had gathered in Bloomington to call for arrests in connection to the alleged attempted lynching of one of the city’s Black residents on Fourth of July at nearby Lake Monroe, according to WRTV. The hit-and-run incident reportedly happened in an intersection around 9 p.m. local time after the protest concluded.

"A woman driving the vehicle came up to the stop and had started revving her engine toward us and we tried to stop her and let her know that the crowd is clearing up," Geoff Stewart, who claimed to be one of the two people seen on video being hit by the car, told the station.

"But, she and her passenger both wanted to go right away so they started to push, they pushed into the woman that was with me and when she pushed again both of us went on the vehicle."

Stewart told WRTV that the driver in the red car then started accelerating.

"I was just trying to block her vision so she would slow down so I tried to pull myself as far in her way to obstruct her view," he added. "She drove through red lights and made her turn... that threw both of us off the car."

Footage taken by local media later showed the woman being loaded onto a stretcher by first responders who arrived on scene.

As of Tuesday, the driver and a passenger seen in one of the videos getting out of the car and throwing a scooter that had been obstructing its path have not been identified.

In the alleged incident that sparked Monday's demonstration, Vauhxx Booker, a civil rights activist and member of the Monroe County Human Rights Commission, claimed he was “almost the victim of an attempted lynching” that left him with a minor concussion and some bruises.

“On July 4th evening others and me were victims of what I would describe as a hate crime” Booker wrote in a Facebook post describing the ordeal. “I was attacked by five white men (with confederate flags) who literally threatened to lynch me in front of numerous witnesses.” 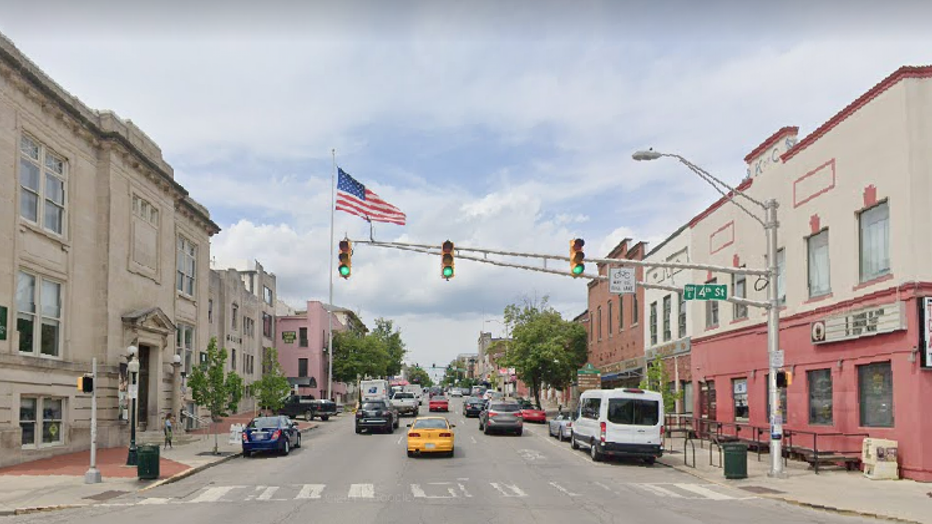 The intersection in Bloomington, Ind., where the car was seen on video driving into two protesters. (Google Maps)

Booker said the alleged attempted lynching happened after one of the men claimed he was trespassing on private property near Lake Monroe, where Booker went to view a lunar eclipse.

“The attackers... stated to the members of their party several times to, ‘get a noose’, amongst some other choice slurs,” he wrote. “With me still pinned underneath them they kept telling onlookers to leave the ‘boy’ and that everyone else (all white) could go.”

The Indiana Department of Natural Resources told the Associated Press that its officers responded and are investigating that incident, with a final report to be sent to the Monroe County Prosecutor’s Office.

Bloomington’s mayor and city clerk also issued a joint statement saying the incident exemplifies the “persistence of racism and bias in our country and our own community.”