The deaths of two men have rattled Chinatown. On Wednesday night, more than 300 people from the community showed up for their vigil.

CHICAGO - The deaths of two men have rattled Chinatown. On Wednesday night, more than 300 people from the community showed up for their vigil.

One woman told her story to Byron Sigcho-Lopez, who is the alderman of the 25th ward. She says not too long ago someone held a gun to her head and it took 30 minutes for police to show up.

The alderman says since the killings Sunday morning, more police are on the streets in the Chinatown community.

“There are now two patrols, there used to be one,” Sigcho-Lopez said.

It was the early morning hours Sunday when three friends just returned from dinner. They parked the car in the 2000 block of South Wells. Police say the suspect, 20-year-old Alvin Thomas, wanted their possessions. Thomas reportedly shot Weizhong Xiong, 38, several times as he was exiting the passenger seat. His wife managed to exit the driver’s seat crawling under the car to safety. 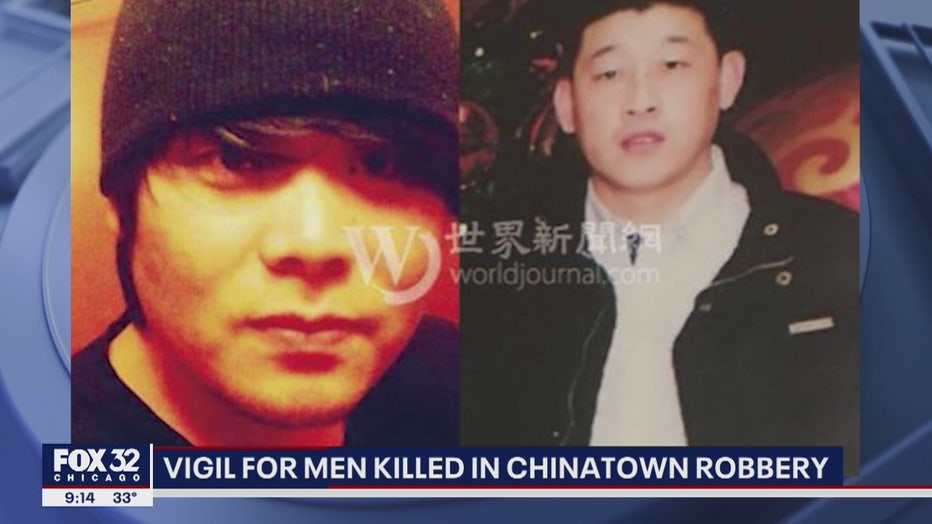 Her friend, Darien Lin, says Xiong's wife is devastated over the killings.

The suspect struggled with Huayi Bian, 36, who had $10,000 on him. He was set to buy a car the next day to start his delivery service. Sadly, he was shot in the head and died.

Donations were collected for the families and to raise money to send their remains home for their funeral services.

The suspect, Alvin Thomas, was found four minutes away. He’s charged with two counts of first-degree murder and will be in court February 24.