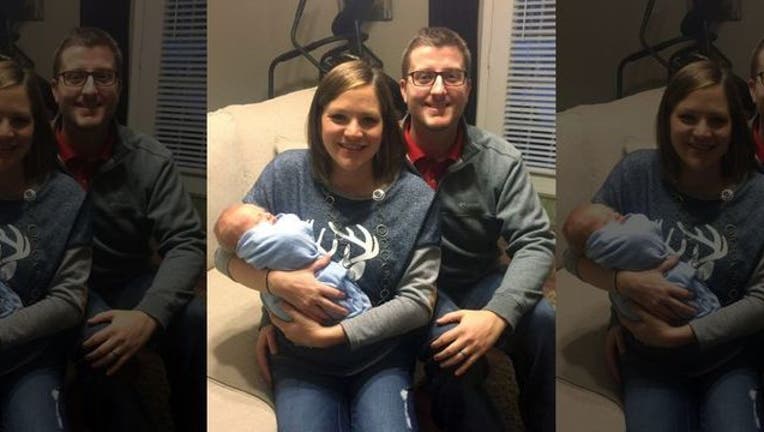 (FOX 11 / AP) - Luke and Hillary Gardner never have a problem remembering each other's birthday. After all, the husband and wife were born the same day. And so was their son, 27 years later this past December.

The odds of that happening are about one in 133,000, statisticians say. And that's a lot less likely than getting hit by lightning sometime in your lifetime, which some put at roughly one in 12,000.

They weren't aiming at a joint birthday when their son Cade Lee Gardner was conceived, said Luke Gardner, an assistant pastor at a Baptist church in northeast Mississippi and a student at a nearby campus of New Orleans Baptist Theological Seminary.

"I really didn't even put it together until we got pregnant," he said in a telephone interview Wednesday. "Then we realized, 'Oh, wow!'"

Using a smartphone app, he said, his wife calculated a due date of Dec. 15, three days before their joint birthday. Her obstetrician called it for Dec. 19.

So the couple from Baldwyn, Mississippi, got in some exercise to try to hurry the baby up a bit. The night of Dec. 17, Gardner said, "we went walking" around the parking lot at First Baptist Church of Baldwyn, where Gardner is outreach pastor.

They learned about their shared birthday before they started dating, while just part of a group of friends who hung out together.

"I saw it on a Facebook page first and asked about it," Gardner said. "I couldn't really believe it when I saw it. I had to confirm it with her."

The chance of meeting someone born the same day as you is one in 365, explained Tumulesh Solanky, chair of the math department at the University of New Orleans. He said the chance of two people being born on the same day and having a baby on their birthday is about 1/365 times 1/365.

"That comes out to .0000000751 - seven zeros and then 751," or about 7.5 in a million, he said, which comes to about one in 133,000. Statisticians note that this ignores such factors as leap years and the fact that births are not evenly spaced throughout the year.

Gardner joked that if he and Hillary Gardner have more children, they may have to try for December.

"If we have any more kids, if we don't get pregnant in March, we'll have to wait till the next year," he said.