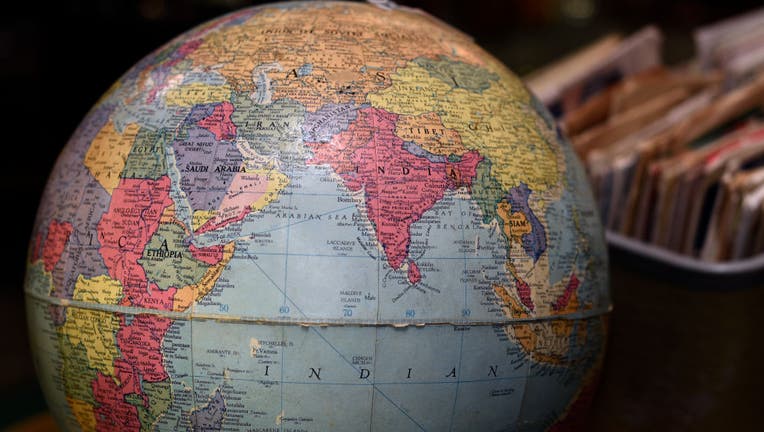 FILE - A vintage globe of the world for sale in an antique shop in a file image dated Dec. 9, 2019, in Santa Fe, New Mexico. (Photo by Robert Alexander/Getty Images)

Wordle, the five-letter word game that became one of the first viral trends of 2022, has since launched several spinoffs — including a new "Worldle" game that looks like a typo but is intended for geography buffs.

The original Wordle game was created by Josh Wardle, a Brooklyn software engineer. He first made it for his partner but later released it to the public in October. Within just a couple of months, the free online word game exploded in popularity and has since been purchased by the New York Times.

The simple puzzle, which lets players guess a five-letter word in six tries with no hints, now has millions of daily players, according to the newspaper. It’s also become somewhat of an online phenomenon, spurring copycats like "Airportle," where you guess airport abbreviations, and "Queertle," with words for the queer community.

The latest variation shows players a shaded outline of a country, shifting the challenge from the dictionary to the world map.

Worldle shows players the silhouette of a county and allows them to guess the correct nation in six tries or less. Each guess must be a valid country or territory. The game was "heavily inspired" by the original Wordle game, according to the site.

After each guess, the game shows the distance, the direction and the proximity between the player’s guess to the correct country – or basically a percentage of how "right" the guess is.

The distances displayed, which are shown in kilometers but can be changed to miles in the settings section, correspond to the distances between the centers of the selected and the target countries. For example, the computed distance between the United States and Canada is around 2,260 kilometers (1,404 miles) even if they share a border.

The web-based map game can be played on a desktop browser or mobile device at worldle.teuteuf.fr.

Under the settings section of the website, players can also make the game more difficult by hiding the country image or randomly rotating the country’s image.

Who created the map-game Worldle?

The creator, who goes by @teuteuf, posted about the game on Jan. 30 on Ko-Fi, a platform that works like a tip jar — allowing creators to direct fans to their page to leave a tip.

"Inspired by Wordle, I made a variant of this game where you have to guess a country instead of a word," teuteuf wrote. "To find the good answer, you start with the shape of the country and get some hints after each guess: the distance and the direction between your last attempt and the target country!"

"Everyday you'll have one country to guess, everybody has the same," they added.

By mid-February, the developer wrote on Twitter that more than 500,000 people had played the game on a single day.

"You crazy people! It was supposed to be just a small side project! We are now half a million who played #Worldle today!," the game creator wrote. "Thanks to all of you!"

Other spinoffs games inspired by Wordle

For some, Wordle has become a daily obsession. But once played, users must wait until the next day to guess a new word.

Luckily, there are other spinoff games that have launched and allow players to show off their correct guesses in the form of green squares.

"Lord of the Rings" fans can try their luck at "Lordle of the Rings," which uses only five-letter words from the books.

"Nerdle," created for those who seemingly love math and numbers, requires players to guess the day’s equation in six tries. Instead of the alphabet, players use numbers and plus, minus, and equal signs.