How COVID-19 vaccine makers would adapt to new variants

New coronavirus variants have cropped up in the U.S.and vaccine makers are readying themselves in case regulators call for changes to their recipe.

GENEVA - A senior World Health Organization official said it was "very premature" and "unrealistic" to think the COVID-19 pandemic might be completely stopped by the end of 2021, but noted that hospitalizations and deaths could be dramatically reduced with the recent arrival of effective vaccines.

Dr. Michael Ryan, director of WHO’s emergencies program, said at a media briefing Monday that the world’s singular focus right now should be to keep the transmission of COVID-19 as low as possible and to get as many people vaccinated as quickly as possible.

"If we’re smart, we can finish with the hospitalizations and the deaths and the tragedy associated with this pandemic" by year’s end, Ryan said.

He added that WHO was reassured by emerging data that many of the licensed vaccines appear to be helping curb the virus’ explosive spread.

"If the vaccines begin to impact not only on death and not only on hospitalization, but have a significant impact on transmission dynamics and transmission risk, then I believe we will accelerate toward controlling this pandemic," Ryan said. 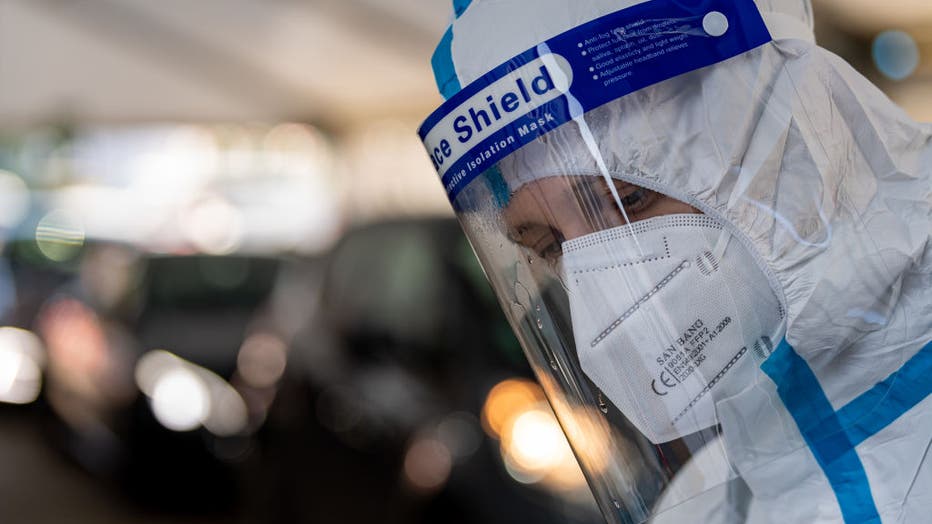 FILE - Staff in PPE wait to test people as they arrive at a COVID-19 test station on March 2, 2021 in Saarbruecken, Germany. (Photo by Alexander Scheuber/Getty Images)

But he warned against complacency, saying that nothing was guaranteed in an evolving epidemic and that the virus "is very much in control" right now.

His comments echoed those by the director of the U.S. Centers for Disease Control and Prevention last week, who stressed that although the number of cases and deaths have declined in the U.S. in recent weeks — the trajectory of the pandemic is still concerning due to emerging variants that could be stalling progress.

"The latest data suggest that these declines may be stalling, potentially leveling off at still a very high number," CDC Director Rochelle Walensky said Feb. 26 during a White House coronavirus task force briefing.

RELATED: ‘The virus is not done with us’: CDC director says new variants of COVID-19 could stall progress in US

WHO’s director-general, meanwhile, said it was "regrettable" that younger and healthier adults in some rich countries are being vaccinated against the coronavirus before at-risk health workers in developing countries.

Tedros Adhanom Ghebreyesus said immunizations provided by the U.N.-backed effort COVAX began this week in Ghana and the Ivory Coast, but lamented that this was happening only three months after countries such as Britain, the U.S. and Canada began vaccinating their own populations.

"Countries are not in a race with each other," he said. "This is a common race against the virus. We are not asking countries to put their own people at risk. We are asking all countries to be part of a global effort to suppress the virus everywhere."

WHO stopped short of criticizing countries that are moving to vaccinate younger and healthier populations instead of donating their doses to countries that haven’t yet been able to protect their most vulnerable people.

"We can’t tell individual countries what to do," said Dr. Bruce Aylward, a senior WHO adviser.

The U.S. has authorized three COVID-19 vaccines for emergency use, with the most recent shot being a one-dose vaccine by Johnson & Johnson — set to be delivered to states for use beginning Tuesday. J&J shipped out nearly 4 million doses Sunday night and said it will deliver about 16 million more doses by the end of March, and a total of 100 million by the end of June.

Nearly 20% of American adults — or over 50 million people — have received at least one dose of vaccine, and 10% have been fully inoculated 2 1/2 months into the campaign to stem the pandemic, according to the CDC.

Vaccine expert on differences between Johnson & Johnson and Pfizer, Moderna

Dr. Williams Moss, an epidemiologist and executive director of the International Vaccine Access Center at Johns Hopkins, shares the science behind adenovirus vs. mRNA vaccines.

Tedros also noted that for the first time in seven weeks, the global number of COVID-19 cases increased last week, after six consecutive weeks of declining numbers. He described the increase as "disappointing," but said it wasn’t surprising.

Tedros said WHO was working to better understand why cases increased, but that part of that spike appeared to be due to the "relaxing of public health measures."

In the U.S., public health officials have sounded the alarm about states reopening too quickly as worrisome coronavirus variants spread. Walensky on Monday urgently warned state officials and ordinary Americans not to let down their guard, saying she is "really worried about reports that more states are rolling back the exact public health measures that we have recommended."