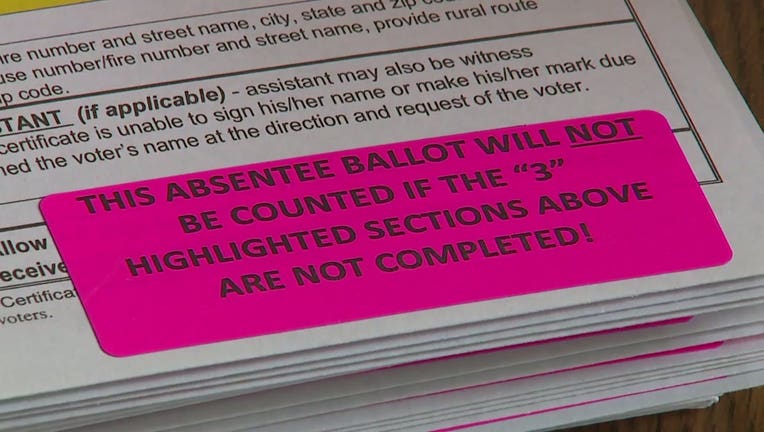 OUTAGAMIE COUNTY, Wis. - Police are investigating how three trays of mail, including absentee ballots, ended up in a ditch in Wisconsin, a swing state whose voters could prove crucial in the upcoming elections.

The Outagamie County Sheriff's Office said the mail was found around 8 a.m. Tuesday morning near the intersection of highways 96 and CB, near the Appleton International Airport. and was immediately returned to the U.S. Postal Service, Fox 11 reported.

"The United States Postal Inspection Service immediately began investigating and we reserve further comment on this matter until that is complete," USPS spokesman Bob Sheehan said in a statement.

The incident comes a mere five weeks before the presidential election, which has been steeped in partisan bickering over the system of mail-in and absentee ballots and wavering trust in the alternate system.

Due to the coronavirus pandemic, which marked a grim milestone this week of over 200,000 deaths in the U.S., voters are expected to cast ballots by mail in record numbers.

“We expect more than 3 million Wisconsin residents to vote in the November election, which means even more first-time absentee by mail voters,” Meagan Wolfe, the elections commission’s administrator, said in a statement earlier this month.

Wolfe said that before the pandemic, only about 6% of Wisconsin voters cast an absentee ballot by mail. During the state's presidential preference primaries in April, that number jumped to 60% when 1.1 million of the 1.55 million votes were absentee by mail. During the partisan primary in August, Wolfe said approximately 82% of the 867,000 votes cast were absentee, either by mail or in the clerk’s office.

During the primaries, thousands of voters from all over the state, but particularly in the Oshkosh and Appleton areas, complained that they did not receive the absentee ballots they requested. Complaints filed with the Election Commission included one from a Milwaukee postal worker who said three bins of absentee ballots were located and had never been delivered, according to reports by the New York Times.

In early September, information packets were mailed to 2.6 million registered voters about their options for voting in November. It urged voters to request absentee ballots before the deadline of Oct. 29, warning that it could take up to seven days for voters to receive the ballots in the mail and another seven days once it's posted back to the Election Commission.

President Trump told Fox News' Brian Kilmeade on his radio show Thursday that mail-in ballots are a "horror show" and missing ballots are "emblematic of thousands of ballots" that could get lost this election season.

His comments come even as Democrats and election officials hope to encourage voter turnout, even if not in person, and reinforce confidence in the mail-in system.

Strategists predict that Democrats are more likely to vote by mail than Republicans, which could affect some of the most closely watched races in the country.

In Wisconsin, a key battleground state that Trump snagged for the party's first time in over 30 years by just 27,000 votes in 2016, Biden holds a five-point lead over the incumbent president, according to a recent poll by Reuters/Ipsos.