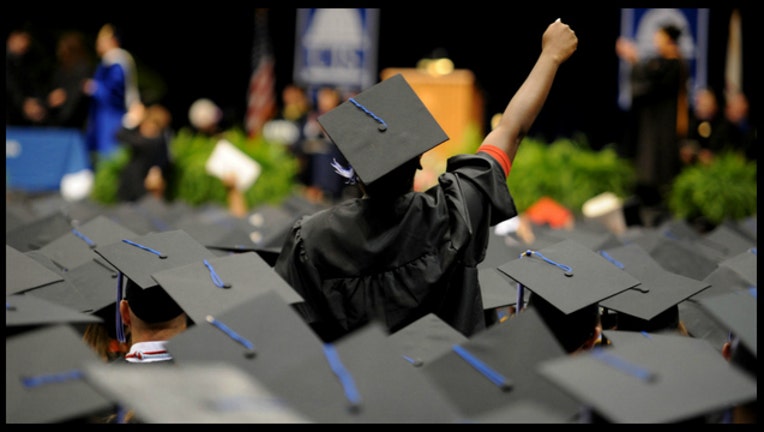 MADISON, Wis. (AP) - Black students should be offered free tuition and housing at the University of Wisconsin-Madison because blacks were legally barred from education during slavery and university remains out of reach for black students today, the student government said Wednesday.

The Associated Students of Madison said in a resolution that students from suburban high schools are overrepresented. The group said consideration of ACT and SAT scores in applications restricts opportunities for the poor and thus upholds "white supremacy."

Race relations have been a contentious issue at the Wisconsin's flagship campus for months. The university has proposed some measures aimed at improving diversity.

"The university's rhetoric suggests that it is committed to diversity and inclusion, so this legislation compels the university to move towards action - which is imperative," the resolution's author, ASM Student Council Rep. Tyriek Mack, said in a statement. "If no one challenges the university's empty promises, then the racial composition will remain stagnant."

The resolution demands free access to the university for all black people, including former inmates. That means free tuition, free housing and no fees, Mack said. That would save a black resident undergraduate student about $20,000 a year.

The resolution goes on to call for the university to use 10 percent of donations to bolster financial aid and study the feasibility of test-optional and geographically weighted admissions.

The language mirrors demands that the Black Liberation Collective, a national network of black youth focused on higher education, has made to nearly 90 campuses across the country.

Black students currently make up about 2 percent of Madison enrollment. University spokeswoman Meredith McGlone noted the proportion of "students of color" has grown from 11 percent to 15 percent over the last decade. She said the school supports the spirit of the resolution but that it's unclear whether the methods it proposes are legal or the best way to accomplish those goals.

Chancellor Rebecca Blank has proposed giving first-generation transfers from two-year schools free tuition for a year, contingent on funding in the upcoming state budget, and a recent $10 million donation will be invested in expanding the Chancellor's Scholarship Program, which supports minorities, McGlone said.

ACT and SAT scores are not the only factor in admissions to the university in Madison, but their inclusion is required under regent policy, McGlone said.

Last spring, pictures of swastikas and Adolf Hitler were posted on a Jewish student's door, someone hurled racial slurs and spat at a black student in a dorm, and police arrested a black student during class for spray-painting anti-racist messages on campus buildings. Minority students spent the semester pressuring administrators for change.

Last month, a student who was imprisoned for burning down two black churches tried to start a white supremacist group on campus. He abandoned his efforts following intense backlash, but the student government criticized Blank for saying he had a legal right to express his views.

The university in August proposed building a black cultural center, introducing discussions about social differences and expanding ethnic studies courses and diversity training for all faculty and staff.

In-state undergraduate tuition has been frozen for four years and Gov. Scott Walker has proposed a 5 percent tuition cut for resident undergraduates in the second year of the upcoming state budget. Representatives of the Legislature's budget-writing committee haven't responded to an email Thursday seeking comment.

Asked for comment on the resolution, Mike Mikalsen, an aide to state Sen. Steve Nass - a Republican and one of the university's most outspoken critics - responded by calling ASM a waste of student fees.

Madison Bevan, a sophomore from Los Angeles who identifies herself as black-white biracial, called free access for black students a good way to bolster their numbers on campus. She said one student in her dorm told her she was the first black person they've ever seen.

"There's such a small number of (black) people on campus, it's very easy to feel like you're alone," she said.

Chinese graduate student Yuhong Zhu said the resolution is awkward and he'd rather see more scholarships than a blanket offer of free access.

"I wouldn't appreciate if the school offered me free tuition just because I'm a minority," he said. "We should at least have to work hard for it."

Jared Akers, a white student at the school, said the resolution was "odd" and that free access for blacks was unfair.

"That," he said, "kind of seems like a handout more than doing them any favors."