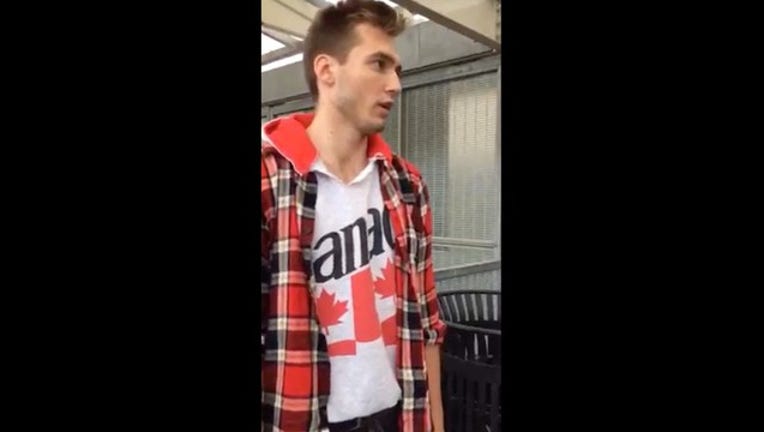 A man was arrested with the help of bystanders after he punched a woman in the face on a CTA Red Line train on the North Side last week and a scuffle broke out when other riders came to her aid.

Jake Bradley, 24, of Rogers Park said he was riding the Red Line between Addison and Belmont about 4:30 p.m. July 8 with a friend and his girlfriend, when a man started walking up and down the aisle shouting at people.

When a woman who was asleep on the train woke up and asked the man to quiet down, he punched her in the face, breaking her sunglasses, Bradley said.

“The punch cut her face badly and it began to swell immediately,” he said in an email.

The woman grabbed the attacker’s genitals and squeezed, while Bradley and another rider on the train charged the man, he said. The man pushed the first rider away, and when he attempted to kick the woman, Bradley punched him in the face multiple times, breaking his own hand in the process.

When the train arrived at the Belmont station, everyone off the car got, and Bradley’s friend (who did not wish to be identified) grabbed the man’s wrists and pulled him onto the platform.

“As we saw the CTA security guard coming, we thought the ordeal was finally coming to a close. We were very wrong,” Bradley said.

The employee stood nearby and called 911 as Bradley’s friend restrained the attacker. The security guard told Bradley he was not allowed to help them.

Almost half an hour later, police arrived and arrested the suspect.

Danny Whitney, 56, of the 1600 block of West 63rd Street was charged with one misdemeanor count of battery, according to Chicago Police. He is next scheduled to appear in court Aug. 12.

“CTA personnel alerted CPD once they were made aware of the incident. CPD subsequently made an arrest,” CTA spokesman Jeff Tolman said.

In general, Tolman said, the employee is supposed to contact CTA’s control center and report that a customer is in need of assistance. The control center personnel will then call the city 911 center and assess the situation.

Tolman said the transit agency’s security department has been notified of the incident.

Bradley thinks the guard should have done more.

He said the man told them, “That our options were to let the man go and have him run away, otherwise it was up to us to keep the man restrained until the police arrived. We begged him to help but he refused. He just stood there, not even checking on or administering first aid to the woman.

“At the end of the ordeal we were all shocked … Why is there even a button on the train if they can’t even help in a moment like this? My girlfriend is afraid to even get on the CTA anymore because clearly if she was attacked and overpowered, the guards would turn a blind eye. That’s disturbing to me.”

He said it was not until after the arrest that he went and had his hand x-rayed, and learned that it was broken.