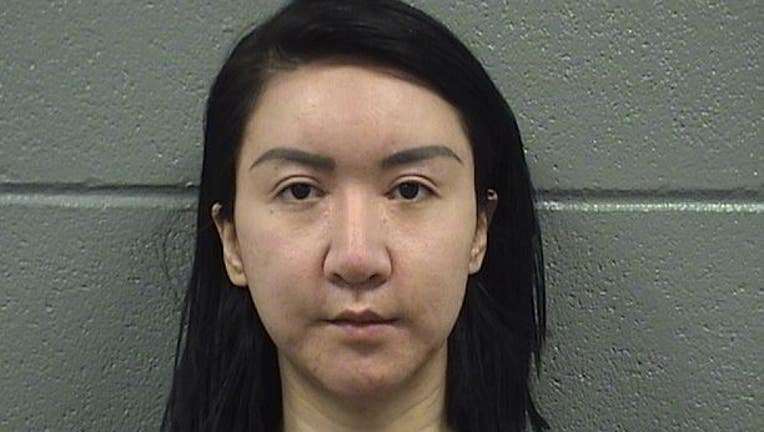 CHICAGO - An Oak Forest woman allegedly drove onto the Dan Ryan Expressway as her husband clung to the roof of their car, but he later fell off and she ran over and killed him, prosecutors said Wednesday.

Haihua Cheng, 27, faces charges of reckless homicide and failure to report an accident involving death in the incident earlier this week.

The couple were in a Nissan Rogue SUV on Sunday afternoon when Cheng’s husband, John Gutierrez, got out of the car to put money in a parking meter while they were on their way to a doctor’s appointment in Chinatown, Assistant State’s Attorney James Murphy said in court Wednesday.

Cheng then moved into the driver’s seat of the car, prosecutors said. Gutierrez, 31, was then seen trying to open the door of the SUV and then climbing on the roof of the car as she drove away, according to Murphy.

Cheng’s private defense attorney, Jun Wang, told the Chicago Sun-Times that Cheng said Gutierrez was addicted to drugs and had been physically abusing her for two weeks prior to the incident. The couple were on their way to the doctor because Cheng had suffered a leg injury he caused, Wang said, and he allegedly tried to stop her from getting out of the car or reporting the abuse to police.

When Cheng drove away, she got on the Cermak Road feeder ramp to head south on the Dan Ryan and eventually got into the express lane, driving 55 mph as Gutierrez clung to the roof rails and pounded on the SUV, Murphy said.

A witness followed the SUV for part of the drive, including when Cheng took the Garfield Boulevard exit to leave the expressway, Murphy said.

As the SUV slowed to a near stop, Gutierrez got off the car and tried again to open the passenger door, but Cheng allegedly began to drive away as Gutierrez continued to hold on, and he fell.

Gutierrez’s head and neck were then run over by one of the SUV’s rear tires, Murphy said, but Cheng continued to drive away and did not call the police. He was later pronounced dead at a hospital.

Cheng drove back to Chinatown and parked the SUV in a lot, Murphy said. She allegedly called a friend and they discussed allegations of domestic violence by her husband against her.

Together, Cheng and her friend went to a Chicago police station to file a report about those allegations, but were referred to the Oak Forest Police Department, Murphy said. After traveling to the southwest suburb, they filed a police report there.

Murphy said Cheng didn’t mention driving with Gutierrez on the roof or running over him when filing those reports.

Wang told Judge Kelly McCarthy his client was trying to escape being kidnapped by her husband when she drove away from him in Chinatown at the start of the incident. The attorney said she couldn’t see the area at the rear of the car and didn’t know she had run him over, and had later tried calling him.

Cheng has no prior criminal history and wasn’t a danger to the community, Wang said. She works as a nail technician and could only afford a minimal bond, he said. All of her relatives are in China, he said.

McCarthy made no comments in court, but set a $100,000 cash bond for Cheng, meaning she would be required to post the full amount to be released as the case continues. McCarthy added that if Cheng is released, she would not be allowed to drive.

Cheng is expected back in court May 17.