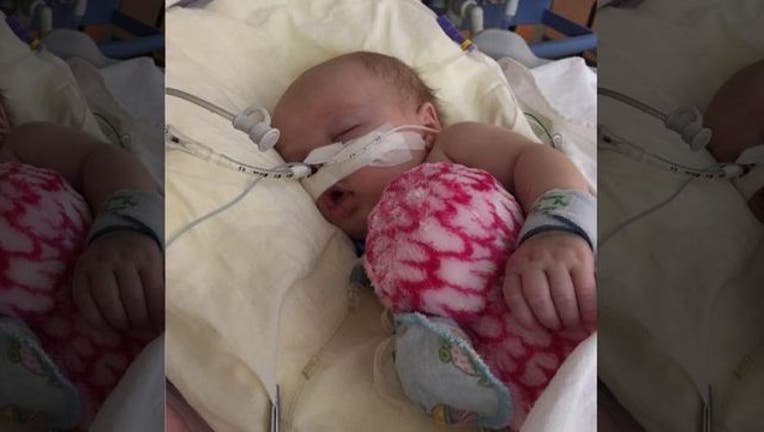 FOX NEWS - A Canadian woman’s heartbreaking photos of her newborn in the hospital have reignited an online conversation about the effects of not vaccinating children. News.com.au reported that Annie Mae Braiden’s 10-week-old daughter, Isabelle, is in an intensive care unit recovering from whooping cough after an unvaccinated child reportedly infected her. Braiden expressed her outrage and updated on her daughter’s condition in a Facebook post Friday.

“So I wasn't going to do this, but I think people need to see what not vaccinating their kids do to the OTHER kids, like my 6 week old daughter,” she wrote in the post. “Isabelle has been in the PEDS ICU since she was 6 weeks old (now 10 weeks) with whooping cough. She was on a ventilator for 3 weeks and CPAP for 3 days (she was the lucky baby, the other ones have been ventilated for months) and we're still facing another 2 months in the hospital.”

According to the Centers for Disease Control and Prevention (CDC) the childhood vaccine DTaP is the best prevention method for whooping cough, or pertussis, a highly contagious respiratory tract infection. The CDC recommends children get five dosese of DTaP, which also protects against tetanus and diphtheria: one each at ages 2, 4, 6, one more between 15 to 18 months old, and another 4 through 6 years old.

In her Facebook post, Braiden, who lives in Victoria, British Columbia, explains that another parent’s decision not to vaccinate their child resulted in her daughter needing to learn how to eat again. Isabelle is also suffering from morphine and sedative withdrawals, as she needed to take the medication while she was ventilated.