CHICAGO (FOX 32 News) - A woman was shot Thursday afternoon in the West Lawn neighborhood on the Southwest Side.

About 4 p.m., three males forcibly entered a basement apartment in the 5900 block of South Kenneth, according to preliminary information from Chicago Police.

During the incident, a 26-year-old woman was shot in the chest, police said. She was taken in serious condition to Advocate Christ Medical Center in Oak Lawn.

FOX 32 is told three people live inside the home: the 26 year old shooting victim and an elderly couple, one of whom is wheelchair bound. We're told this is by all accounts a peaceful neighborhood.

A neighbor who lives directly across the street describes what he saw and heard.

"I saw some guys that went inside, three guys went inside fast - they were wearing black and once I went inside, I was in my living room and that's when I noticed a gunshot was fired,” said Alexis Chavez.

Another eyewitness described to FOX 32 what he saw as the suspects left the house.

"They started walking out. They looked pretty suspicious for some reason. I just stood there looking at them for like 30 seconds, but they didn't look back. They just went on their way,” said Cristian Uruena.

When FOX 32 arrived, there were postal inspectors on the scene. There were reports the intruders were dressed as postmen, but we have not confirmed that. 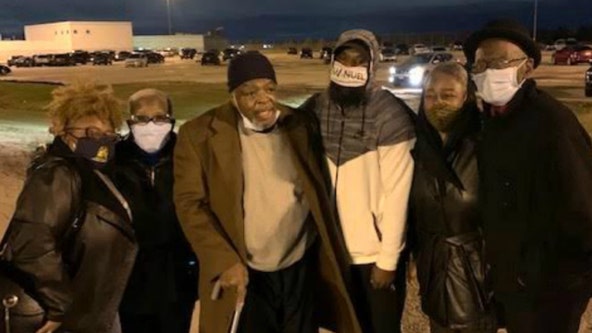